So off we set from Kasmu to Tallinn – 95k – with the lure of our first rest day and staying in a hotel at the end. Good riding day, not too hot, through forest, lots of interesting churches etc. 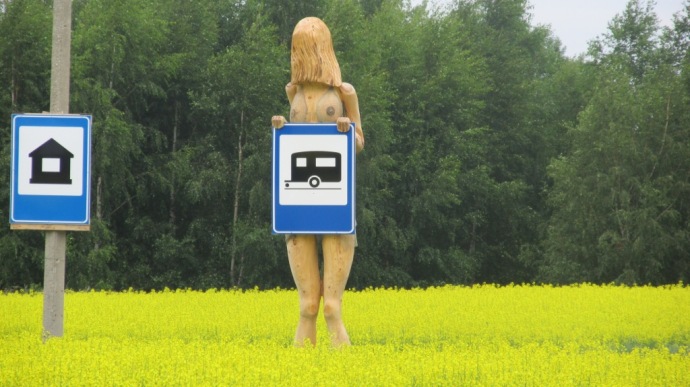 Got to the lunch stop by about 11:30 then into Tallinn. Even with the orange flags and directions I still went the wrong way a couple of times but realized quite quickly. We went past a beautiful cemetery – it went on for miles, in a forest. Getting into town was a bit scary as there was traffic everywhere and as in most large cities the motorists were not as courteous. The “in” thing appears to be roller blading – there were a number of people racing along the foreshore.

I got to the hotel, luckily my room was ready so I went up with the intention of sorting some stuff out but I ended up having a nap for a couple of hours. I woke up and set off to the laundromat to get all the washing sorted, unfortunately there was also a line of people with the same idea so it took a while. Also it had started pouring – luckily it had held off while we were riding.

After finishing the washing I went and looked around the malls – it was great to be back in a place where there were friendly people and stuff to buy. I met up with Walli from Canada and Jenny and her Dad Rob from Australia for tea. We ended up having tea at the mall due to the relentless rain however it was surprisingly good. I had stuffed chicken breast and rice with a lemon sauce – it was really good. I checked out the supermarket on the snap lock bag hunt but still no luck.