I had a good start to the day as I got a reasonable sleep last night. The local rooster must have slept in because he did not start until after we got up. I have rationalized my panniers down to one which Brett has very kindly offered to carry for me. Every bit will help get through the next three days.

I rang home to get the update regarding how Lizzy and Xavier are getting on. They are both going well, and Lizzy was taking Xavier for his first walk, along the beach near our home. Not that Xavier knew – he was fast asleep! After having a chat to Lizzy, I spoke to Kelly and got some fantastic news.  Kelly is 12 weeks pregnant, she had the scan today and all looks good. So I will be a Gran again at the end of March. It put a big smile on my face. I also shed a few tears, and had to explain to my fellow riders that they were happy tears, as they weren’t sure what was happening on the other end of the phone, they just heard me shriek and then start crying!

So off we went, and of course we first of all had to climb up the 2k we had gone down to camp the night before. Then it was 2k up a 5% gradient – ouch on tired, unwarmed up legs. However this was followed by an 11k downhill 🙂 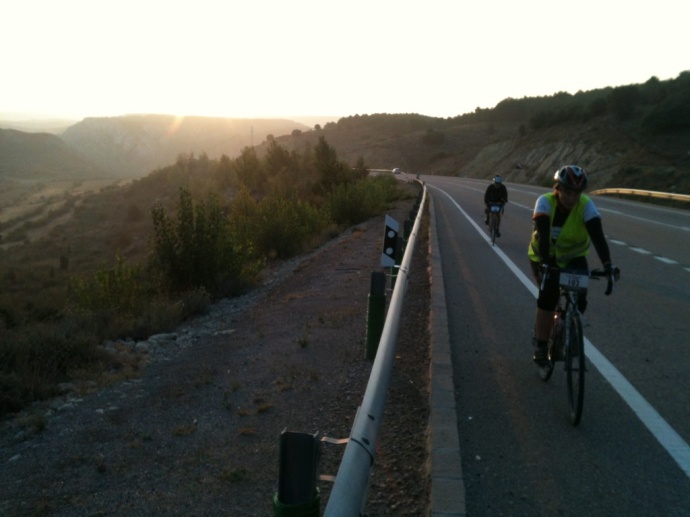 Heading up a hill early in the day

We had rollers for awhile then a 4k up but then a 6k down. Brett said they are honest hills – they give back more than they take. The bugs going up the 4k hill were a pain, trying to get in my eyes, it was very odd seeing them walking across my sunglasses. Plus there were a few I had to spit out, and one I nearly swallowed, yum.

After 20k I had a quick stop and my legs were wobbly and tired, I did not see how they would make the day. Thankfully they loosened up. Overall it was a great ride until lunch. There are lots of small towns perched on the hillside, often they don’t have a shop but they all have a church. We passed a town called Caminreal, it had heaps of Piggeries, there was building after building of them however it looks like the  pigs never get to go outside 😦

As I said, it was a great ride until lunch, and we set off with 55k to go feeling really positive and looking forward to an early day. You know that saying don’t count your chickens until they’re hatched?! Well the afternoon was mostly up; at one point there was a hill that was 15k, with a hideous head wind. The afternoon went on and on.

The ride goes on and on

Thankfully we are staying in a hotel tonight so no putting up tents and listening to noisy campers. It’s a really nice hotel we are staying at, the Parador de Santa Rita, established in 1826. I have a hotel room to myself with three beds and a bath 🙂 But it does have a low ceiling  that I have to look out for, so far I have only banged my head three times.

We had dinner at the restaurant, it was really nice: salad, meat and pasta. I think they were surprised by how much we ate given that we are not enormous people.

Tomorrow we are riding 109k, the same uphill distance as today, and the weather forecast is for the wind to be at least as bad as today.

The Shepard and his dog were walking along with the sheep, they probably cover quite a distance each day. Not much food for the sheep though.