I got picked up at the hotel on time at 10pm and headed off to the airport. The driver insisted I fill out the customer survey before even starting the trip. Given that I had to plane to catch I did not want to argue the point so did it, but based on the previous driver, so good scores. After the ride to the airport I can imagine he wanted it completed first because he’s had complaints before. His driving was scary, weaving in and out of traffic without indicating, drifting across lanes, missing the turn off – I think – to the airport, driving way too fast, and at the airport wanted to dump my bags out on the pavement before I had managed to find a trolley. Trolleys for some reason are not outside at the drop off and can only be found down the far end of the terminal. This driver was totally different from the very nice driver who picked me up.

Of course this was easier said than done, as there was a very long queuing tunnel and the width was not wide enough for a bike box, and if you tip it up the other way you can’t see to steer it! Luckily one of the staff noted the problem and directed me to another counter. For some reason both my bag and the bike box now weighed more than I left New Zealand! There had been nothing added to either and both showed as overweight luggage, however unlike New Zealand this only resulted on a heavy sticker being placed on both bags and they were checked through to Cartagena. Thankfully I had an aisle seat on the plane, so could get up and down to my heart’s content.

I arrived in Colombia at 5am and the next step was to find the gate for the flight to Cartagena which after some trial and error I managed. As the flight went from the same terminal it took me awhile to get that I had to go outside the exit and then into the domestic which was still Terminal One, but next door.

Then I waited for the flight to Cartagena, which thankfully was only one hour and arrived at 8am. As soon as I stepped off the plane the heat hit – hot and sticky. I can only imagine what it must be like in summer. I had been a bit concerned following the cold in Santiago whether I had bought enough warm clothes and whether I should have bought a warmer sleeping bag but given the heat here no need to worry. I am not back in Santiago until mid-October and it will be much warmer then.

Waiting at the baggage carousel, fingers and toes crossed that my bike and bag would arrive. I looked around and could not see any oversize goods counter. Yay out came the bag! Then when all the other bags had come and I was just starting to get a tad anxious – out comes the bike box intact!

Would you believe the airport has no luggage trolleys! And after having heard over and over again “don’t leave your luggage unattended” I managed to drag, shove, and push, my bike box and bag, plus carrying my back pack and camera bag, watched with interest by the security guards.

I was very pleased to see the driver holding a sign with my name waiting just outside the terminal. The transport was a small bus just for me. Bags loaded and off to the hotel. The driver and assistant driver were very friendly and gave me a lot of information about Cartagena, where to go etc.

From the airport to my hotel was about a 15 minute drive. Cartagena is very unusual in that it is divided in two – the old walled city and then new with tall apartment buildings etc.

After traveling all night, I decided sightseeing could wait until Tuesday. I checked in, and had a look around hotel grounds and immediate local area. I am staying in the Hotel Caribe, which is very nice. I have a large room with two double beds, bathroom with shower and bath. I plan to enjoy the next few days before 5 and half months of tenting or sharing. Tomorrow I am off to explore Cartagena. 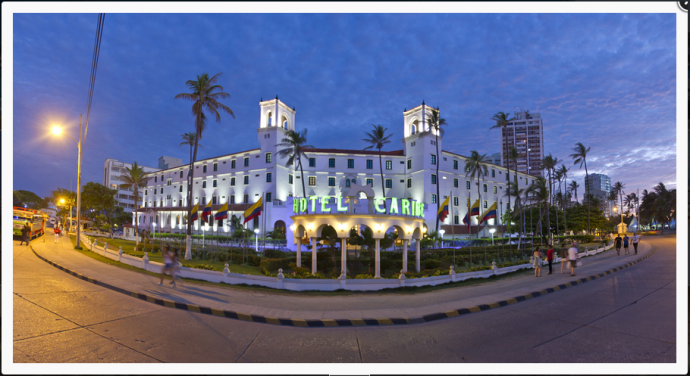 Some of you may be sharing your journey through South America with friends and family via Twitter, Facebook, and Instagram. It’s a great way to send quick words and photos out to the world from a smartphone or laptop. We suggest bringing an unlocked device so you can use a local SIM card. The 2015 tour will be using #southamericanepic as the official event hashtag. Use this in all your Instagram photos, tweets, and status updates to make it become part of the story line of the tour online. It will be used by staff and riders alike. Try it out and tell your family members to follow along on our adventure!

Are You Writing a Blog?

Beside using social networks, many people will also keep a blog to record the events of the tour in a journal format. Family and friends can subscribe to your blog and get alerts via email every time you post a new entry.

There are many free and very easy to use blogging programs to choose from. Try it out, your friends and family will appreciate it.

Here are a few articles that might also be helpful…

Starting Your First Blog, How Do I Start a Blog?, 10 Tips for Beginners

In case of an emergency at home, the best way for family and friends to reach you while you are biking will be through our email as this account is monitored almost 24 hours a day. Please inform your family and friends of the email address that has been sent to you.

Our head office phone number in Toronto is included in your information. From 10am to 6pm EST,  your loved ones can call with any questions they may have.

Also, our office gets regular phone calls and emails from the tour staff, so important messages can be relayed in either direction (Tour to Office or vice versa). Please note that these are primarily for important and urgent messages only. Family members can also follow our Twitter stream as we try to update it regularly from the field with action as it happens.

A few of you have not posted your beautiful pictures yet on our rider profile page. Please login to your MyTours account and upload your photo and description today! See those already uploaded here.