Just to give you a bit of an overview of the first section that I’ll be riding: 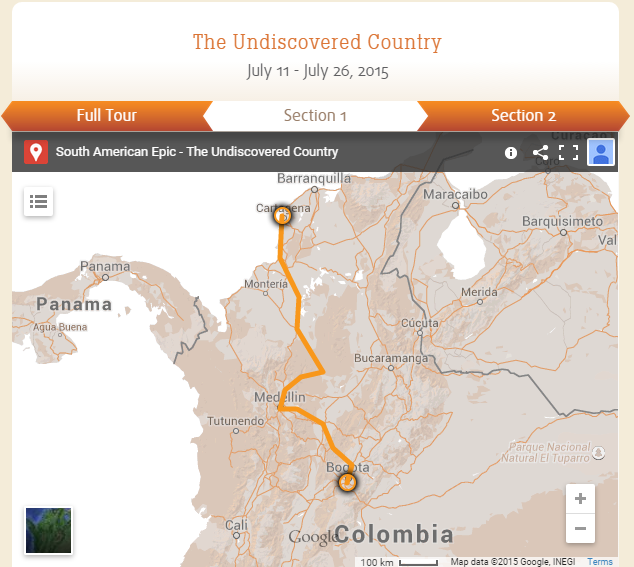 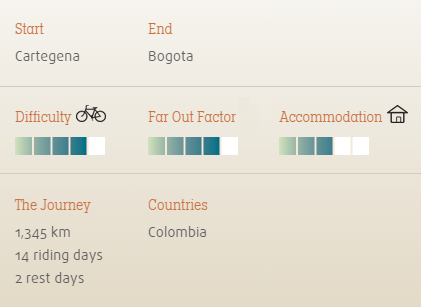 The Experience
For many years the beautiful country of Colombia was avoided by travellers as it suffered through civil war. Times have changed for the better and we are excited to start the South American Epic Bicycle Expedition in this magical land. Mountains, jungles, waterfalls, coffee, beaches and thriving cities are just a few of this country’s gifts.

This 14,000km cycling extravaganza begins in the stunning colonial jewel of Cartagena whose old town is a UNESCO World Heritage Site. We bike down the coast, stopping for cervezas in Tolu’s seaside bars. Turning inland, we’ll then cross cattle pastures and rushing rivers before beginning to climb up into the stunning Sierra de San Lucas Mountains. Following little known backroads we emerge at 1500m above sea level in the city of Medellin, where the cyclists will enjoy a well-deserved rest day.

From Medellin, we spin east and spend a night at Guatape, next to a man-made resevoir, before speeding downhill and across the impressive Rio Magdalena, which drains about 1/4 of Colombia’s area. Then it is a challenging climb up into the Cordillera Oriental, including one 2000m ascent over 50kms. For their efforts, the cyclists will be rewarded by Zipaquira, a beautiful historic town featuring the Salt Cathedral, an underground Roman Catholic church built within the tunnels of a salt mine. The next day, a Sunday, the SA Epic riders will have the opportunity to join local Bogota cyclists as they enjoy their weekly Ciclovia, with many of the city’s streets closed to motor traffic, a fitting end to this exciting and rewarding section.