Of course climbing again today – 2,000 meters again! But with a big downhill as well. The consensus amongst the rides (who between them have done all the rides) is that this is harder than any of the other ride. Apparently this ride makes the South Africa ride look like a walk in the park.

I patched the tyre before I left camp, as I don’t have any of the right inner tubes. I asked a few riders if they had a spare but there had been a number of flat tyres and everyone I spoke to either only had one themselves or their tube would not fit. So I set off thinking “hopefully it will hold for the day”.

The first 40 kilometres were great: rolling hills, and a massive downhill of about 20 kilometres. You could not go too fast though as every few kilometres there would be a bump or gravel, or it would suddenly get rocky and stoney.

After the downhill there was actually flat land for a few kilometres – the first flat land for days! I was enjoying riding along until I got my first flat tyre for the day.  Again the back tyre. I was changing this when two of the other riders, John and Asha, stopped to help. Once again I carefully checked the tyre – nothing! I checked the rim etc, no reason that could be seen. I thought perhaps the patch had lifted so I took it off and re patched.

Back on my way for another 2 kilometres, before another flat tyre, this time I changed it myself! Off again, another 5 kilometres, flat tyre again. I had to find a safe place to stop – 1) off the road and 2) out of the beating sun – 38 degrees!  So I walked to a safe spot, propped my bike up, it unbalanced and I cut my hand catching it. I could feel tears pricking at my eyes.

Just then Tom and Rhonda rode past and said the sweep was just behind them. In about 2 minutes Adrian pulled up and once again checked the tyre and rim, and found nothing. We re-patched it, and Adrian has a really good pump so good pressure in. While we were doing this a local with a ute stopped and offered a ride into the next town.

Off again, stopped about 3 kilometres up the road for some more water and caught up with Tim and Rhonda. The man at the shop noticed I was hot and gave me a fan to use, then gave me lessons in how to use it properly!

Off again, christ it was hot. Due to the flat tyres I was starting a 60 kilometre climb in the heat of the day. Got up another two kilometres and then another bloody flat – the rear tyre again!!!!

This time Adrian stretched one of my smaller inner tubes into the tyre. Then I began a mixture of walking and riding, and catching my breath, and taking breaks in the shade. I came around one corner and came across Tim and Rhonda who had decided enough was enough. They were either going to wait for the lunch truck to come back and get them, or try and get a lift.

Tim and Rhonda are leaving in Bogeta which is about two weeks earlier than they were planning to, because it is too hard. They are the oldest riders here, and although they have done other rides, this ride is harder than expected. It’s a shame as they are a lovely couple. One of the other riders said Tim was instrumental in the design of the first ever TDA ride.

I had the sweep behind me which always makes me feel bad about stopping and being so slow. In the end we decided that he would ride to the lunch truck and then get it to come back when all the other riders had had lunch. I kept going up and up, walking, stopping, panting, riding, sitting, almost out of water.

I decided if I ran out of water I was going to just sit in a cool shady place and wait. Down to the last bit of water and warming up to this plan and around the corner I came across a shop. I drank two bottles of water straight off and bought two more to fill up my water bottles.

I was just about to head off when a ute pulls up with Tim and Rhonda who were getting a lift to lunch – sadly no room for one more! So, up and off again, more of the same: riding, panting, walking, sitting etc.

I got to about another 5 kilometres from where I saw Rhonda and Tim and came across Ray sitting on a chair at a local’s house. I went over to talk to him and he said the hill went up another 15 kilometres and he was waiting for the lunch truck to come back. As it is hard for the truck to stop I decided to wait with him. I asked the man if I could sit down by pointing to the chair and he said I could. He was not over friendly – he was probably wondering what was next. About 15 minutes later the lunch truck arrives!

On my last trip I did not go in the lunch truck to or from lunch at all, and today I have not even made lunch. I am pushing myself as far as I can but the body is not obeying! I am reassured that everyone is finding it tough, but I am disappointed not to be completing days. A mixture of day after day of climbing, the heat, the altitude, being overweight, a heavier bike, and not enough training. Two things for sure: I will be much fitter at the end of this, and I suspect I will be much lighter.

Off to camp in the lunch truck again with Ray, Rhonda, and Tim. We got to camp and I set up my tent etc etc. Tyre was still up. Had a cold shower again.

Where we were camped it turned out it was in front of a bar, and it was Friday night. The locals partied until about 2:30 am, with loud music and enthusiasm. It reminded me of the camp sites in Italy and France. Like there, you just have to remind yourself that no doubt in your younger days you also kept people awake, partying into the small hours, and it’s their home and we are the weird foreigners occupying their space.

I slept intermittently. Once the music stopped, the roosters across town had a crowing contest, and then the dogs joined in. On a positive note, it did not rain and my tyre was still up when I went to bed. 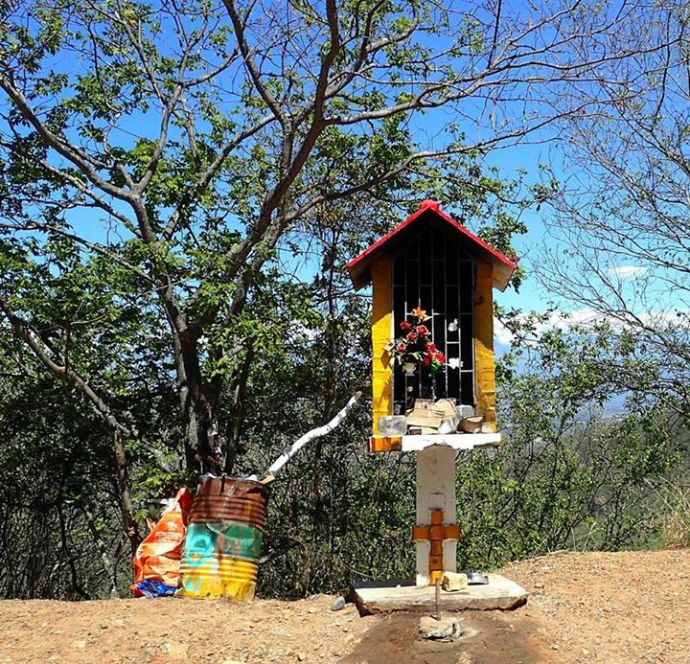 Roadside shrine at about 600 metres up the hill (Photo and caption credit: Sue’s Facebook page)