My tyre was still up in the morning, so I crossed my fingers that the problem was solved. I decided to ride the lunch truck to lunch, as I was fed up with getting into camp late with only just enough time to put up my tent, eat, and crash into bed. Plus I was very weary as I had been kept awake quite a bit of the night by the local pub across the road where they partied on until about 2:30 in the morning, then the roosters and the dogs took over. There were a few grumpy riders in the morning. I figured “Hey, it was Friday night and the locals have the right to do as they usually do”. But added to the last few days, I decided to listen to my body.

Off we went in the truck. We went up and up and had the most spectacular views of the mountains covered in snow. Colombia is a very hilly country, without much flat land so far. We went past a petrol station and there was a horse just sitting and chilling in the forecourt. Ray, one of the truck regulars, commented that the horse was there so that if there was no gas you can continue on horseback.

Certainly the animals here are very road wise and I have only seen two dead domestic animals at the roadside so far. You see locals heading off to work with their horses following them along a main road, not bring led or held at all. There are lots of cows grazing untethered on the roadside as well. Endless dogs happily trotting along the road, and crossing at will, happily preoccupied with their doggy business. There does not seem to be any regulations or a pound truck cruising around. The dogs seem in reasonable health and happy. So far I have not seen a dog fight. If I come back in the next life as a dog, I would like to be a dog in Colombia.

The roads are variable, you get a well paved bit then for no reason it becomes rocky gravel, and then paved road again. There are a lot of areas where there have been landslides and there is only one lane. This becomes a challenge with trucks, mostly the drivers are excellent but there is always the occasional few bad ones, then when both don’t give way, a line of trucks backing is no easy feat!

The one place where the roads are in pristine condition though is 50 meters before and after the toll booths. We go through an average of at least one toll booth a day (bikes don’t have to pay). The road can have numerous pot holes and gravel for a couple of kilometres before and after. At every toll booth there are people selling food and drinks. Often there is a person in a wheelchair or on crutches asking for donations. There is only one per toll booth, almost regularly. You have to wonder if they have to pay for the place!

Today was a very busy section for trucks, endless trucks going both ways, sometimes 10 in a row. I was pleased not to be riding this bit.

I had seen a few locals taking milk urns on their horses or motor bikes, today I saw one with the urns in a wheel barrow. It’s amazing what the locals transport on a motor bike – fridges, wood, whole families, pigs etc.

We had been going for about 40 kilometres when Luis the truck driver got a phone call telling him to stop before 40 kilometres for lunch, as after that there was nowhere to park. It would have been really difficult to turn around because of the traffic so they decided to keep going.

We went for about another kilometre and they saw a local’s house with quite a big front section, so asked the family if we could park there. The family kindly agreed. I don’t think they were quite so happy a couple of minutes later when one of the hydraulic pipes burst in the truck and sprayed fluid all over their concrete!  As Luis and Alejandro (bike mechanic) were busy with trying to sort this out, Ray, John (another truck regular) and I got the lunch ready before we rode off.

I had the job of cutting up left over chicken, helped by the family pets – two dogs and the cat – who happily took care of the chicken skin for me. Luis had managed by this time to get hold of a local truck mechanic who came and fixed the problem.

Off I went for 35 kilometres, 900 meters of uphill. I managed to ride most of it but did have to get off a few times. I have discovered that one of my problems is that I try to ride up hills too fast. My experience of hills is hills that go for 3 kilometres, not 30, and I am starting to realize that you just can’t attack them the same.  There was mostly paved with some sections of rocky and gravel, sometimes two meters and sometimes a kilometre or so.

I hot to about 30 kilometres and I got another freaking flat tyre!!!! Same tyre! Bloody hell! Starting to lose my sense of humour! I had to find a safe space to change the tyre so had to walk for a bit. I spied a piece of flat lawn that looked possible, by what looked like a house. Joy of joy to find it was a shop and I could have a cold drink first. A couple of the other riders were there, once again we checked the tyre and rim. The consensus is that there is a small shaft of glass or wire that you can’t see or feel, that pushes out when the tyre is warm and it pops the tube. I will take the tyre to a bike shop in Bogota and if nothing can be found I will bin the tyre and replace it.

Putting up the tent was done in stages due to the heat. It was nice to be in camp by 2pm and I spent the afternoon sitting by the pool, chatting to other riders, and catching up with the blog. No internet again for the 5th day in a row, even though there was meant to be I could not log on, but at least I caught up a few days and saved in draft. 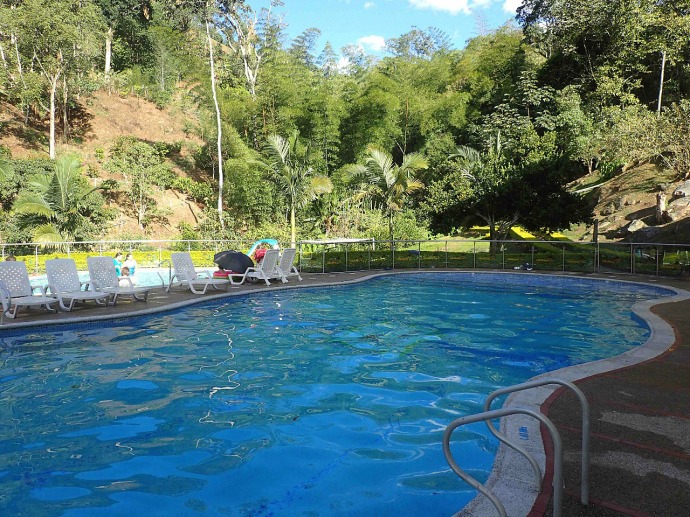 The pool where we stayed (Photo credit: Sue’s blog)

I went to lock up my bike and found I had yet another flat. I decided I was not going to ride the next day in the convey into Bogota – it’s bad enough being a slower rider holding the convoy up, without getting flat tyres as well. 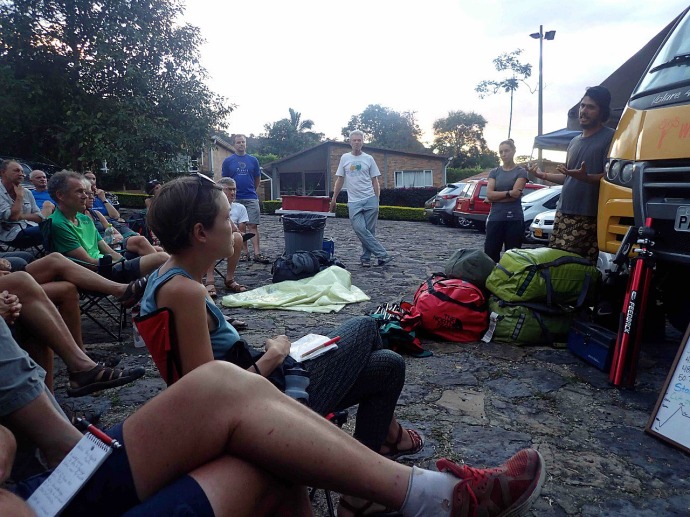 I went to bed about 7:30 but had trouble getting to sleep. There was a youth/ church/sports or something group making lots of noise. This music went on until 4:30 in the morning. They were shouting, laughing, drumming, playing music etc. It was harder to cope with than the night before, which had been a constant beat. I did have my earplugs in but it did not shut out the noise completely. We had  to get up at 4:30 so we could be in Bogota by 2pm.