Despite getting to bed late I was wide awake at 6am. I got up and enjoyed being able to make a cup of tea. I decided to catch up with the blog as I had not done any updates since I left Napier and I like to keep at least a couple of days in front of Editor Kelly.

Brett went off to the supermarket and got some toast bread, butter, and milk, – we already had some marmalade. After doing a couple of updates I went up the road to have coffee with couple of friends Delwyn and Pat who live in Mt Victoria. Then went back to meet my daughter Tracey and grandson Jasper (nearly 5 months old) at mid day.

We went to lunch in Island Bay at a place called Brew’d, I had a very nice Kereru Pilsner and beer battered fish and chips. Jasper was full of smiles and chortles and generally was finding life very amusing. 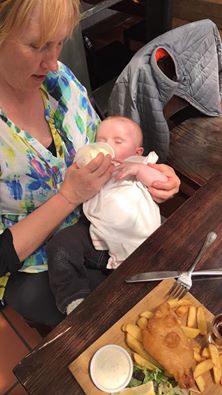 Fish’n’Chips for Gran, a bobble for Jasper Jet

After lunch I went back to the hotel, and Michele and Tony were in the unit next door so they came over to meet Jasper. Tracey had gone to catch up with a friend and her children, but I persuaded her to leave Jasper with me.

At 5pm Tracey picked me up, along with Brett and Sue, and took us to eldest daughter Kelly’s house for a family dinner.

It was lovely to see Kelly, her husband Daniel, their daughter Lucy (aged 3 1/2); Tracey and Jasper; Lizzy and her son Xavier (aged 4, and otherwise known as Jig) and Lizzy’s partner Kiel. Lizzy had been on night shift so Jig had stayed at Kelly’s and they had been to a Christmas fair, where they had both had their faces painted. Jig was a Tiger and Lucy was a pirate.

Telling a story to Lucy and Jig 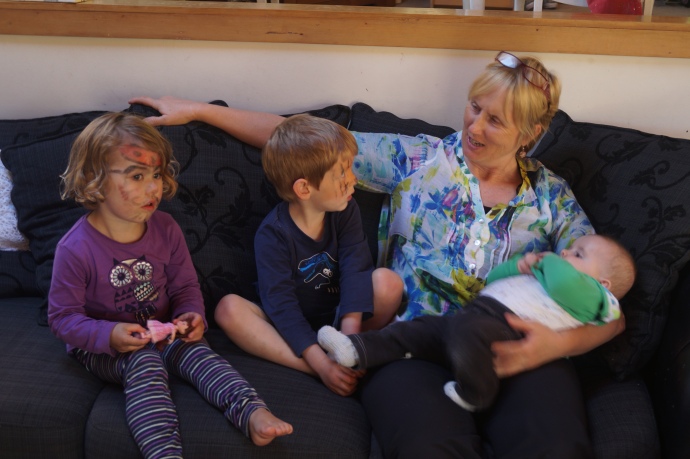 My children were interested to meet Sue as they had read so much about her on the South American blog, plus Kelly (blog editor ) had got lots of photos from Sue’s emails and blogs. They had all heard so much about each other that they all felt like they had met already!

We started with a lovely cheese platter and Kelly, by request, had made homemade burgers plus as a surprise pork spareribs. Kelly had also gone to the trouble of getting a bottle of Hawkes Bay HaHa sparkling wine after reading about it on the blog.

I had lots of fun, it was great to catch up and get a chance to spend time with Jig, Lucy and Jasper.

Then it was time to go back to the motel, I was a bit sad to be leaving but am going to be back home in two weeks. Tomorrow we catch the ferry to Picton and stay in Picton, so it will be like another rest day.