The weather remained fine and today should be a relatively easy day, not much climbing , not a long distance, and not much rain.

We had the choice of the highway, or following a bike trail which would keep us off the main road but would add about 35 km and the surface was gravel and possibly not hard packed. Given it was a Sunday I decided the traffic would be lighter so chose the road.
There was probably only three trucks the whole day and they were milk tankers which would work 24/7, but also quite a few buses.

At 12 km we came to the last remaining shared bridge in NZ, which is shared by cars and trains, and until recently by cyclists. Thankfully when they created the bike trail they clipped a bike lane to the bridge. 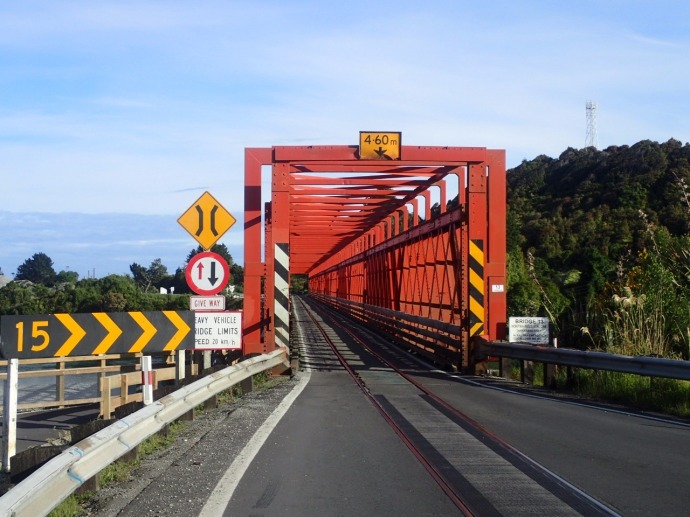 The bike path on the side of the bridge (Photo credit: Sue’s blog)

At 36 km we stopped in Hokitika for coffee, and we went down to the beach. There is a concrete armchair down there that looks just like a real arm chair. Outside the coffee shop was a big arm chair made of driftwood, pretty impressive, wouldn’t mind two of them on my deck at home.

The ride was mainly rolling hills with some climbs but nothing significant. Stopped in a town called Ross for a drink and took a couple of pictures of a house and a general store with car number plates all over them. 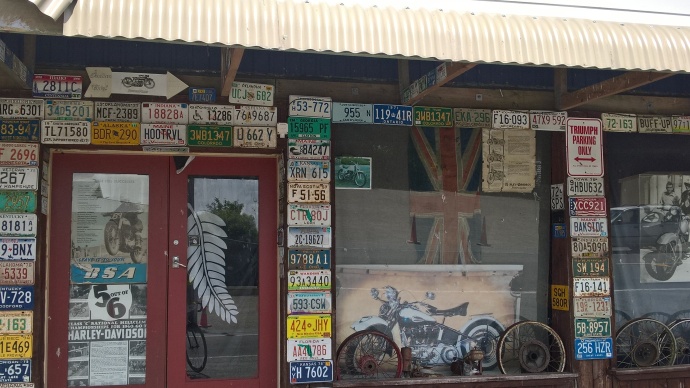 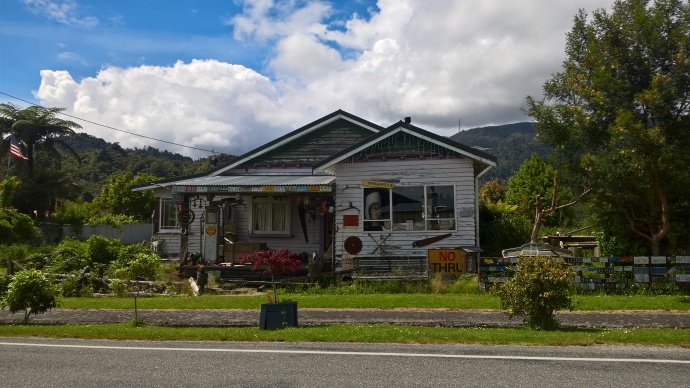 The person in front of me at the shop was a local and had their shopping entered onto a card. To start off with I thought the guy behind the counter must be writing down all the purchases, but then realised the local was putting his stuff “on tick” (buy now, pay later – usually pay day). This took me back to my childhood where we would be sent to the corner store to get stuff “on tick”. Every now and again the shop keeper would say ‘Tell your mum she needs to come and see me”. Looking back that must have been when the tab was getting too high and he wanted to be paid, but he always gave us what we had come in for.

Lunch wasn’t until 82 km so I was getting pretty hungry by the time we got there. I had a sandwich and then an apple. I decided rather than throw my core in the rubbish bin, that as it was organic, I would throw it into the bush. Unfortunately I didn’t think about my terrible aim and actually threw it straight at Justina’s head! Oops ! It gave her a hell of a fright. I apologized profusely and she was ok, and thankfully it had not hit her eye or anything. Imagine the ACC report! Note to self: put all food scraps in the bin, always!

The afternoon saw some amazing rivers, and it got pretty hot. We were pretty happy to arrive in Hari Hari even more happy to find the Hari Hari Hotel open and we could sit inside and have a cold beer. I also bought Justina a drink as continued demonstration of remorse. 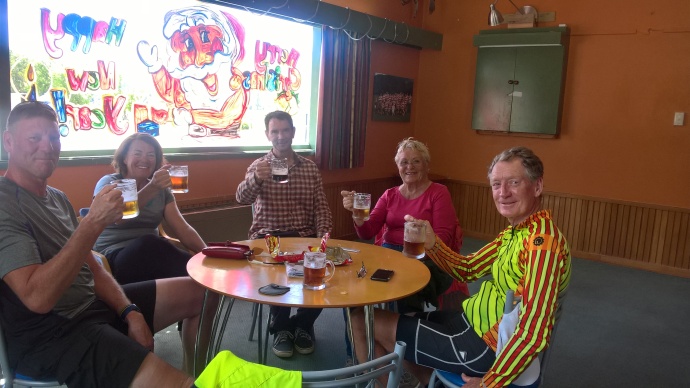 At the camp we also managed to get a room with a shower so we didn’t have to compete for the one female shower with the other riders.

Hari Hari’s claim to fame is that it was where the first pilot to fly solo Trans-Tasman landed. Upside down in a swamp! Guy Menzies told his parents he was flying to Perth and left them an envelope to open after he had gone, telling them he was flying to New Zealand. He had to land at Hari Hari as was out of fuel but did not realise it was a swamp, he thought it was flat ground. He walked away with only a few scratches.

Every riding day, before dinner, we have a riders meeting. At the start of tonight’s meeting, Emily (tour leader) said with a totally straight face “First of all, we have to deal with the serious matter of an assault on another rider. Kaye, you have been yellow carded” and handed me a yellow card. Emily said 3 more yellow cards and I would be off the trip.

The majority of the riders had already heard about the incident, and thought it was very funny. For the rest of the evening I had people sitting in front of me and then saying “Oh that’s right, not safe here” and moving etc – all in good fun. Justina has ridden past me a couple of times since then with her arm over her face.

Getting my yellow card

Trying to explain / defend my actions

Dinner that night was sausages with onion and gravy , smashed potato, broccolini and cheese sauce and sauerkraut. Plus fruit cake with custard and cream. Washed down with a shared bottle of Craggy Farm Merlot.

Getting close to Hari Hari