The day we have called “Hurry up and wait” – today we have three ferries to catch.

Stage one 34 km to the first ferry: Pag Island back to the Main Land (Croatia) with 15 min ferry trip 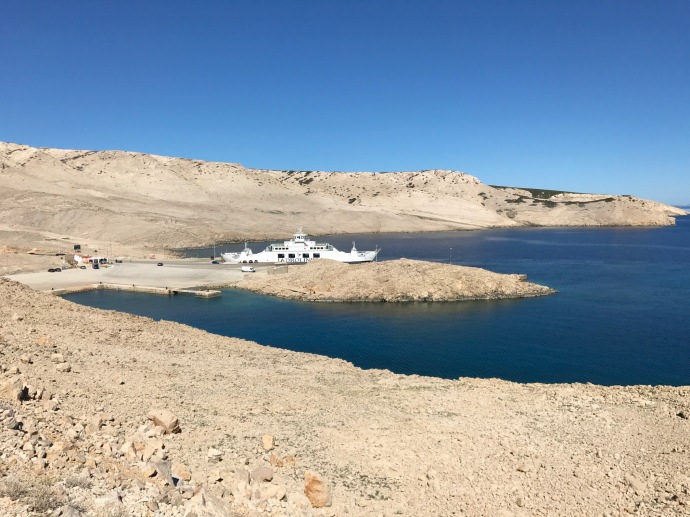 Of course the road to the left that I was so happy not to have to ride up yesterday, turned out to be the road I had to ride up today! It was a hard start to the morning with legs not warmed up. A steep first 3 km then steady up for 4km. At the top of the 3 km there was a sign on the stone saying “lunatic”, most riders – myself included – stopped there for a photo. After this it was steady to some steep up and down hills, with the final couple of km down to the next ferry. 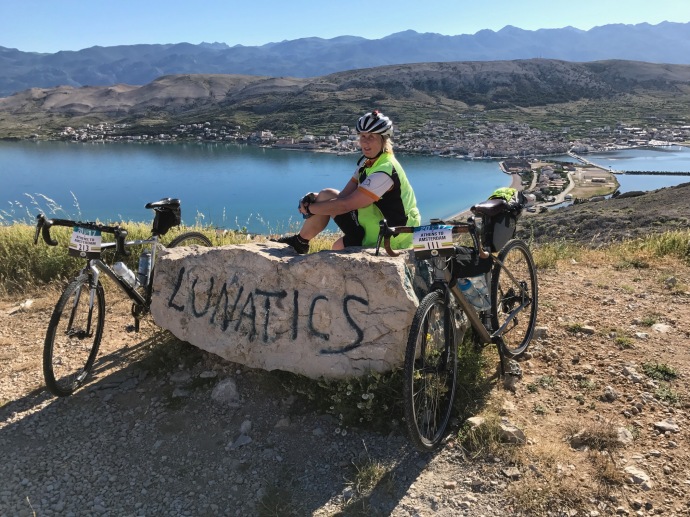 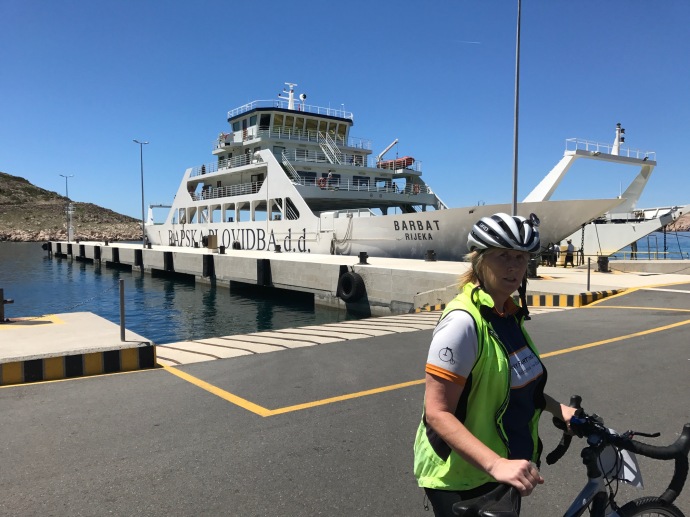 Boarding the 2nd ferry at Sinica

I spent my time talking to the other riders, and getting to know them better. I have captured a few backgrounds, but have not yet got photos apart from Graham. Graham is a mostly retired plumber from Melbourne. Graham is a larger than life character and whereever he is you can hear laughing. He is a bit hard to understand as he manages to speak without seeming to move his mouth. This is Grahams first TDA, ride and he is mainly interested in doing self supported cycling. Graham has 3 children and 2 grandchildren. and a rough coated Jack Russell dog. The dog goes on training rides with him, and after 20 km jumps up into a basket for the rest of the ride. 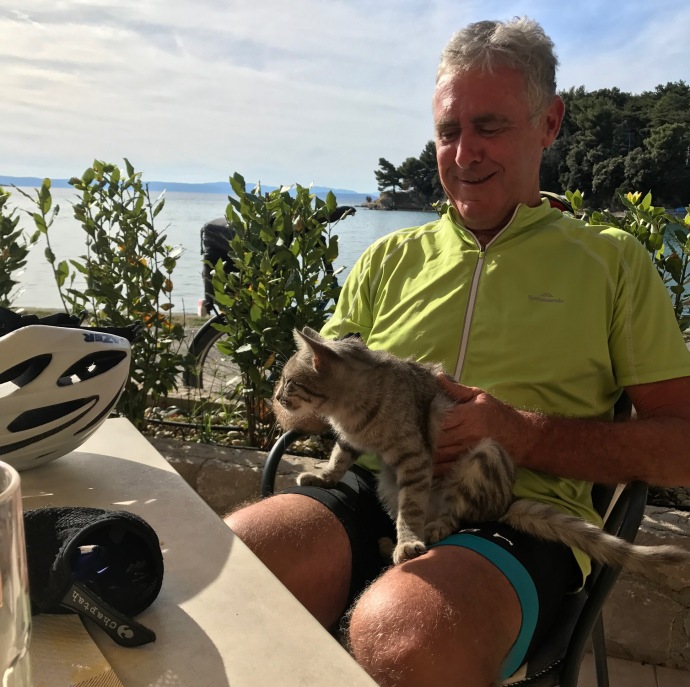 Grame, waiting for the ferry at Lopar to take us to Kirk Island (third ferry)

Another steep climb out of the ferry terminal in the hot sun. This stage had climbs and descents. I was getting pretty tired during a long climb up, and was very pleased to get to the descent down to the ferry terminal. I just arrived and it was time to get onto the next ferry.

Are we there yet? Coming into Rab Island

I am finding taking the top off my water bottles to drink or fill quite difficult, as I grasp with my sore arm and turn with the other. I always like the top off to drink, as I don’t like the taste of the water through the spout. When I put the tops back on I have not been tightening properly. This I found out by twice having to go back down a steep gradient to retrieve the cap! Am making sure now they are tightened.

After 2 km it was the lunch stop, where we were given the news that Grego had made a mistake with the ferry times. There wasn’t a ferry to Kirk Island where we were staying at 230 or 430 like he thought, the next ferry  was actually 630pm. This ferry is one and a half hours ride, meaning it would be nearly 8pm by the time we got to Kirk Island.

At this stage it was about 12 pm. This meant 18 km to ride in 6 and a half hours. Like most people, Brett and I detoured 10 km into the town of Rab and had a look around and a cold drink. We then found a cool spot in the park and had a nap. 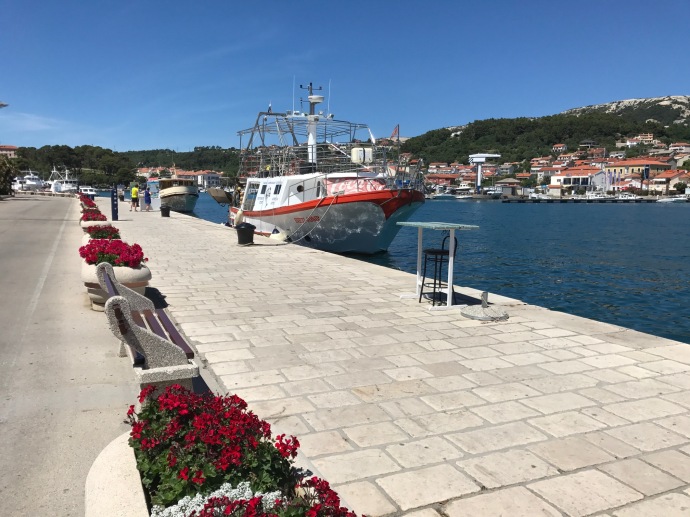 At 4pm we set off the 15 km to the ferry. Another climb on legs that thought they had finished for the day. We weren’t sure how long it would take to get to the third ferry, and as it was the last one for the day we did not want to miss it so we allowed time for a puncture etc. Consequently we arrived at the third ferry terminal one and half hours before it went. Luckily there was a cafe with sun umbrellas. There was a friendly kitten, about four months old, interested in participating in any food opportunities.

At 6:15 no cars or people had boarded, so I was thinking it was going to be an even longer night, but then they started boarding us and the cars, and the ferry set off right on time at 6:30 pm. The ferry’s are all very clean and well kept. There were not a lot of people of board, so plenty of space to stretch out and have a nap.

Unlike in NZ, dogs travelling on the ferry don’t have to stay down in the car, they are allowed to wander around the decks.

None of the riders were keen to start the last 13 km, and a bit of concern that it may get dark. I have a head lamp and a reflector, but is more for going through tunnels than night riding. The first 6 km had some steady climbing and I was pretty over it. Thankfully the last 7 km were mostly down and we arrived at Hotel Malina.

At reception they gave us the instructions to get to the room: up the lift then along the corridor ,then down some stairs, and along another corridor. It was the longest walk I have ever had to a room, ever! About 5 minutes! After dinner one of the other riders Peter E (one of the three Peters on the trip) told us that if we went across the courtyard, up the set of stairs, it would take us to the corridor where our rooms are – time to get there: one minute! Which it was!

The room had a nice balcony but it was dark by this time. We had to hurry to get down to dinner before the restaurant shut. I had a very quick shower.

Dinner was a buffet but not a buffet for 1000s like at the Blue Sun, it was actually pretty good. They provided a chilled red and white wine, and beer. Brett and I sat with Peter E and Ruth. Peter E and Ruth are from Toronto, this is their 3rd TDA ride.

By the time we finished eating it was 1030pm, so late to bed and a big day tomorrow.

On Rab Island ferry to ferry only 20km.