I enjoyed lying in, feeling a bit tender after yesterday’s ride, so am very pleased to have a rest day to recover.

At breakfast we were told that Graham is ok, but has a broken bone in his face and will most likely not be able to continue riding. Graham is going to be discharged from hospital later today. Caught up with Yvonne, and she is feeling much better.

After breakfast we looked at getting the hotel to do the laundry, but it really is only an option for people who just want a couple of items done. I worked out to get mine done it would have cost €70! So off we walked to the laundromat. To do both of ours at the laundromat it cost us €18 combined. I always take my iPad and do a bit of of catching up with the blog. 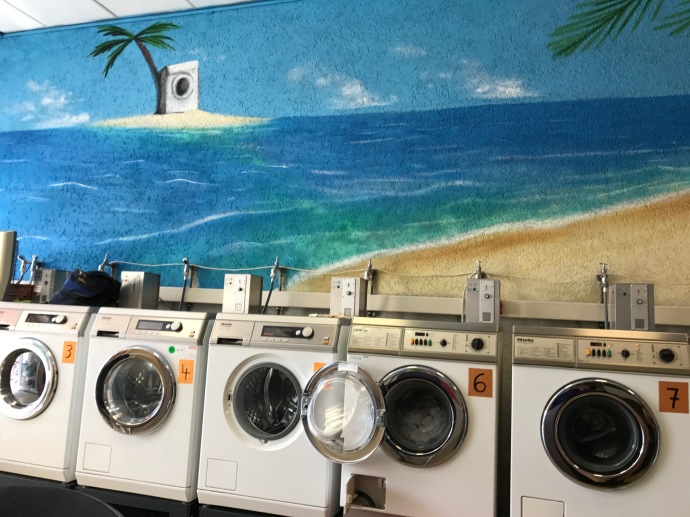 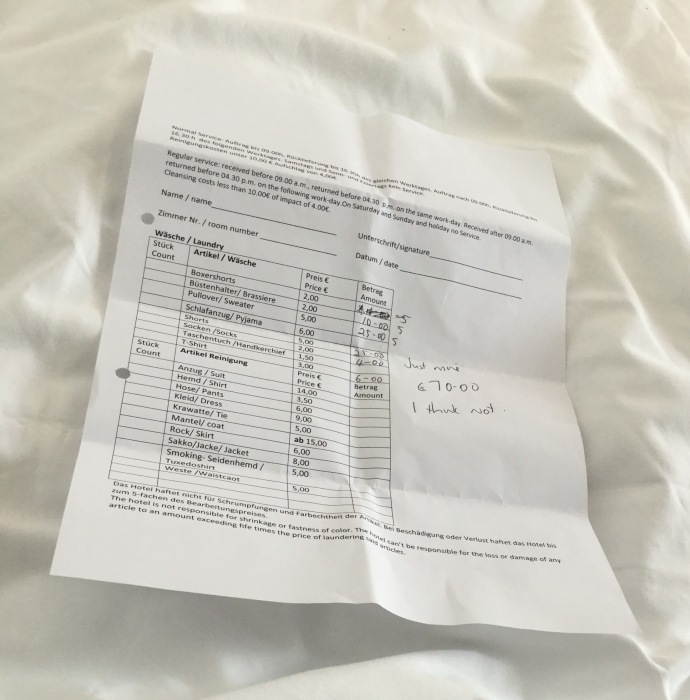 This morning before breakfast, I had a messenger call with my 11 month grandson Jasper, and daughter Tracey. Jasper was very excited to see me, and kept trying to get into the iPad where I was. The day after I get home is Jasper’s first birthday celebration.

Walking through the city I noticed the number of apartments that have trees and shrubs on their balcony. 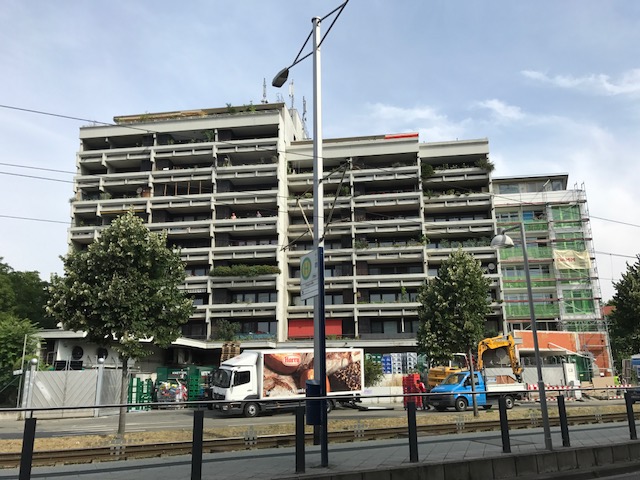 I have also noticed the increased rate of smoking, the cigarettes on display, cigarette advertising, and also there are a number of cigarette machines on the street in the villages and cities. I was a bit surprised as was thinking children could use these, but apparently you have to put ID with proof of age in before you can purchase. 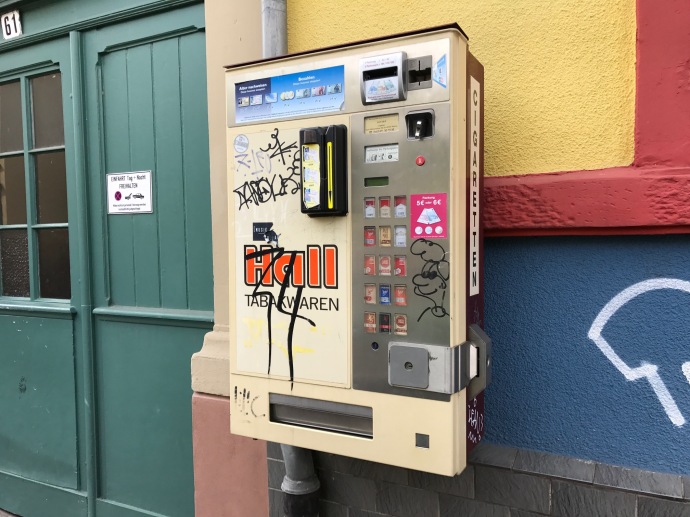 After doing the laundry we had a drink at an outside cafe with John W, and then decided what do to for lunch. John wanted pasta, and Brett and and I decided on a picnic. We had a lovely lunch with a baguette roll, blue cheese, brie, small cake of dark chocolate, and a Bordeaux wine (we actually wanted a rosé, but there was no chilled wine to be had, so settled on the red). It was very relaxing to just sit and do nothing for awhile. Then back onto catching up with emails and the blog.

At 6 pm we went down to the hotel bar for a beer, while we waited for a couple of Brett’s friends from a previous tour, who we were going out for a meal with. As we were having a beer, Graham turned up looking bruised and battered. Graham has no memory of what happened, but there was no car involved. Graham suspects he hit the curb the wrong way.

He remembers coming to and having two locals helping him up. They asked him if he knew where he was and he said no. They then said “You’re in Germany, doing a bike ride from Athens to Amsterdam” (They got this off his riders plate on his bike), and he said “Don’t be stupid, why would I be doing something like that?”.

Graham is not sure what he will do as he has broken a cheek bone around the sinus, and is not allowed back on a bike for a couple of weeks. While a group of us were talking to Graham, Janice came in and I took a photo of him and her “The concussion twins”. 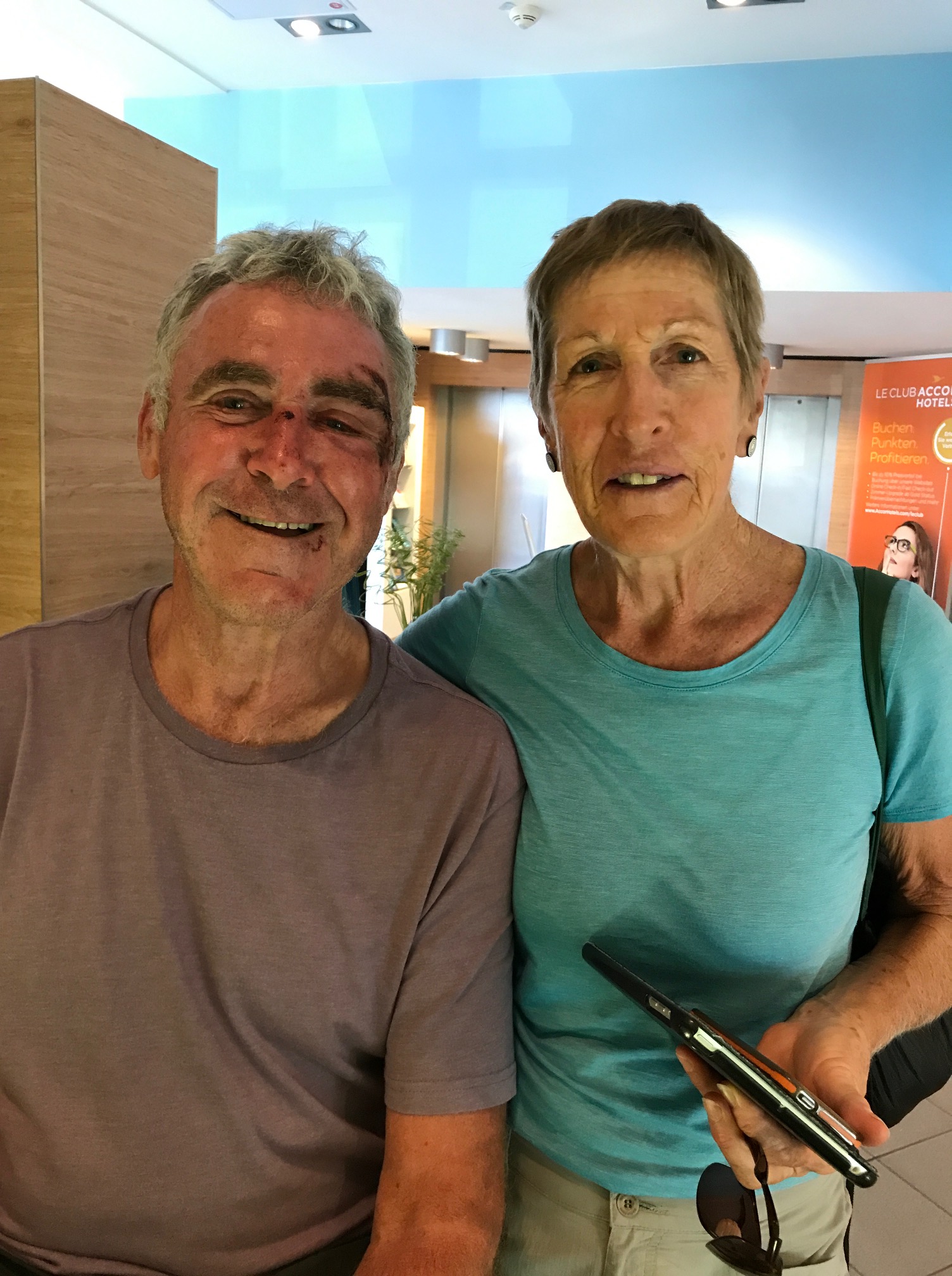 Graham and Janice – the concussion twins

Also in the bar were Tim and Judy, also from Wellington NZ.

Just then Brett’s friends arrived. They met on the Aussie section of 2014 Trans-Oceania. Lydia is originally from Townsville, Queensland but is now living with Joachim in Germany. Joachim is German. Lydia is working as a Librarian and Joachim works in IT. They are both keen marathon runners and triathletes. John W also did this ride, and came for dinner. We went to a really nice Thai place, I didn’t get the name. I had tom yum soup – it was nice and spicy, and green curry which was very nice.

Then back to the hotel to pack and get ready for another 3 day stretch.

Janice is from Townsville Queensland and this is her first TDA ride. She is retired, she worked as a student advisor counsellor at the University. Janice’s partner was going to come on the ride, but couldn’t get a health clearance to do it, so is doing the pilgrims work in Spain instead.

Tim and Judy are from Wellington NZ, they have 3 children and a labradoodle and a poodle. This is their second TDA ride. Tim is an actuary and Judy is a mother. They are heading off to Cuba for another two week ride after this trip. 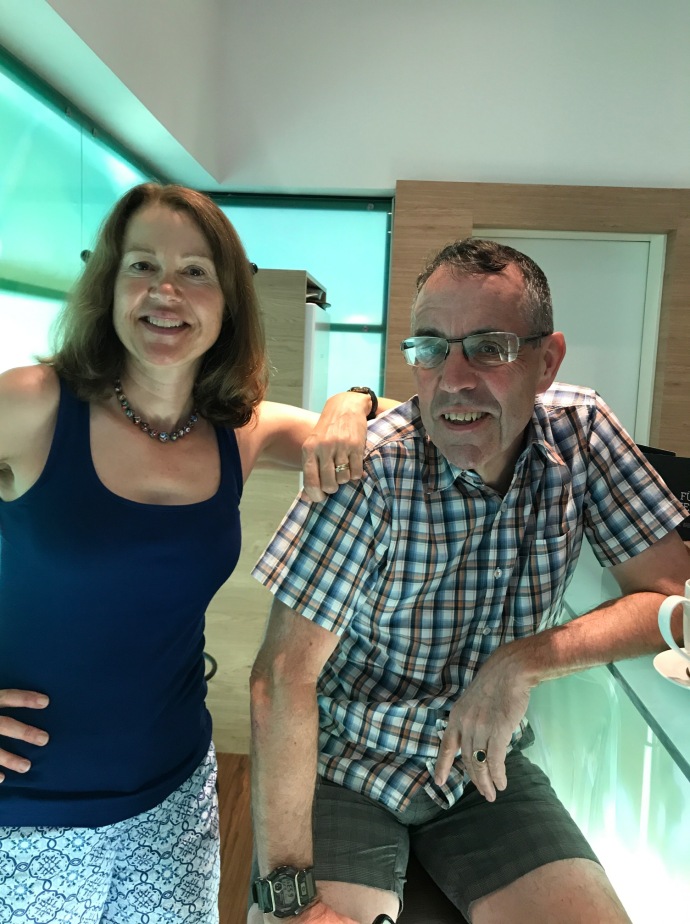