To start off is a convoy out of town for 8 km, stopping and starting with early morning traffic and traffic lights. As a big group we kept getting separated by traffic lights but finally we were off. 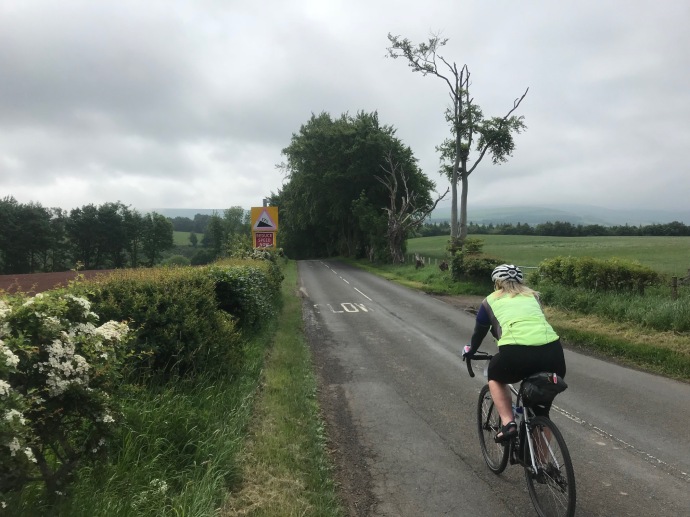 The first few km was fairly easy along the sea, but then we turned and went up over the Scottish Moors. It got colder and colder, misty and bleak. Some steep climbs and descents.

I had all my gear on but had forgotten to put my full finger gloves into my bike bag. Could have done with these, as well as a merino top (I am so making a list next time). Even the sheep were huddled up against the walls keeping out of the wind.

There were some steep 17% climbs, I managed two but not the third as I got cramp in my tight calf, which made even walking up the hill difficult. I managed to walk sideways crab like up the hill. 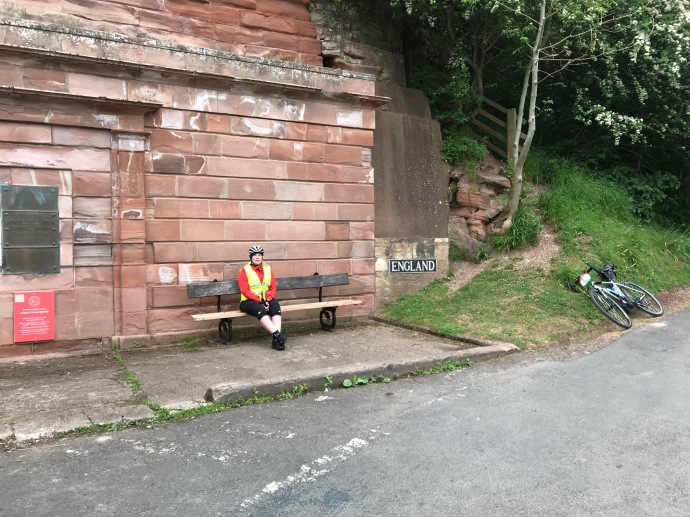 Lunch was at 65 km, and the coldness caught up as soon as you stopped.

Lots of climbing after lunch, at one stage we rode up a steep hill only to ride back down again, I am pretty sure to the road we had just left.

At the top of the hill a man was sitting on a bench seat looking out at the view. “Where have you come from today?” he asked. When I said Edinburgh he commented that I must be crazy, which I almost agreed with. Just after this one of the really fast riders
Mary came past, she had taken a wrong turn straight after lunch and done another 18 miles!

Finally we turned back to follow the coast and the climbs were up and down rather than long climbs. Coming over the top of one hill was Bamburg Castle by the sea, a stunning looking building.

We finally got to SeaHouses where we are staying at Bamburgh Castle Inn (about 15 km past the castle). It was really cold and I was really pleased to get it inside the Inn which was lovely and warm. The rooms was also warm, but I was pleased it was not the weekend as it looked straight out over the parking area. It had a funny little bathroom with a very small shower and three steps leading down that I thought “I will have to watch out for during the night”. 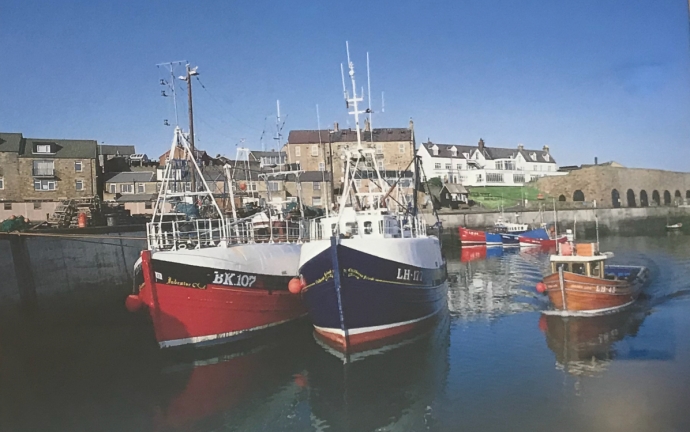 Bamburgh Castle Inn above the harbour

I really enjoyed a couple of cups of tea to warm up. Thankfully a kettle and teabags in the rooms has been pretty standard for Ireland and Scotland, and now England.

We got in at 4:30pm some of the riders were close to 7pm, a big day for everyone but hats off to those who kept going all the way and got in so late. So far only two riders have caught the bus and only once.

Once again it’s a set menu for dinner. I sat with Shirley, Dan, Michele, Tony, Brett and Henry. Shirley is now vegan and I have to say her meals seem consistently nicer than ours, maybe I should consider this next trip.

I had a Monty python lager, it was not nearly chilled enough (not for NZ taste).They have a lot of “cask chilled” but not cold beer here, I will watch out for cask chilled in the future.

We had lentil soup, dry chicken, and plastic cheese cake. Shirley had chickpea curry and sorbet. The serving of dinner again took far too long, from 6 pm to 8pm. I was pretty tired after dinner, so pretty much straight to sleep. WIFI in room was non existent.

Tomorrow Sue who did the South American and NZ ride with me is joining us in Newcastle for dinner.