I woke up very excited to be going to the Maasai Mara on Safari. We are staying at the Karen Blixen Conservation Trust Camp. There are 13 camps only in the Conservation reserve and only people from those camps have access to tours around the conservation land. The numbers of beds at the camps are limited with most having only 13 double tents. The one we are staying in has 16 tents.

Karen Blixen was an author who wrote a book based on her time in Africa. Karen came from Denmark. Karen went on many safaris with the love of her life Denys Finch Hutton. There is a film and a book based on her life called “Out of Africa”. Karen worked hard to improve the life of the local people, especially the children.

This camp is named after her. The Karen Blixen Camp is a gold rated eco-friendly camp. In 2014 the Karen Blixen Camp Trust was created by the camps owner. The trust is committed to protect the endangered Maasai Mara eco system through conservation, community development, and education programs. These range from
1. The Mara elephant helicopters protecting the elephants and gently moving them away from human populated area and ensuring poachers are aware that they are there watching
2. The education initiative providing 18 months education for the local Maasai aged 18 to 25 in food cooking, business, language and information technology (there is a cooking school based at the camp)
3. Women’s programme which offers support with business opportunities, financial counselling, and vocational training
4. School for 320 children aged 4 -15
5. Movable Bomas (fences) to avoid over grazing and human to wildlife conflict
6. I was also delighted to know there is a dog project providing vaccination, worming, treating for mange, and spaying and neutering.

We got into conversation with another dinner who told us she has had her flight delayed by two days due to the disruption and is hoping to get out today.

Back to the room to get our bags and discover the safe won’t open! I am pretty sure the manager will have an override key for when guests forget what password they set. Thankfully they do and the safe is opened. Then we headed off to meet Walter who was already there, along with Mike, to take us to the airport.

Walter wasn’t exaggerating when he said the traffic is busy. There are cars, vans, trucks and heaps of people walking. There are queues for every intersection, some controlled by policeman. Talking to Walter about his country is sobering. The unemployment rate is approx. 50% and there is no unemployment benefit! In Nairobi there is a slum of approx. 800,000 people most of whom have no employment. There is sometimes work for the day at some businesses so the men will work the 7m or so there to wait and hope to pick up a day’s work for 2-3 dollars and walk the 7 k back home.

Most of the businesses are owned and run by Indians who work hard, but by preference will always employ Indians.

The schools are overcrowded with up to 100 children per teacher and health care is spasmodic. The workers can pay into a health insurance but there is a lot of corruption. Walter will have months of contributions not show up as having been received. In the past year his records show 3 admissions to a private hospital he was never at. Walter is happy to have a job so he can feed his family. It’s hard to imagine a system with no social welfare assistance and no work opportunities. No wonder the crime rate is high.

We are lucky today the traffic is better than normal and we arrive at the local airport having only taken 35 min to get 10 km. I am pleased to find the plane is a 16 seater and not smaller.

We have a 45-minute flight with 3 stops before our destination. When we are up in the air you can see how very dry the area around Nairobi is. We get further out and it starts getting greener, about 20 min into the flight instead of cows I start seeing zebra, giraffes, a small herd of elephant and various gazelles. It is fantastic.

We land at the Maasai Mara and Jonathan from the Karen Blixen camp is waiting for us. The camp is about a 35-minute drive. On the way we see lots of giraffes and zebra and a range of gazelles. The camp is located right by a river which has a resident herd of hippo submerged, a couple of crocodile on the one part of the bank, and gazelle further down the banks. 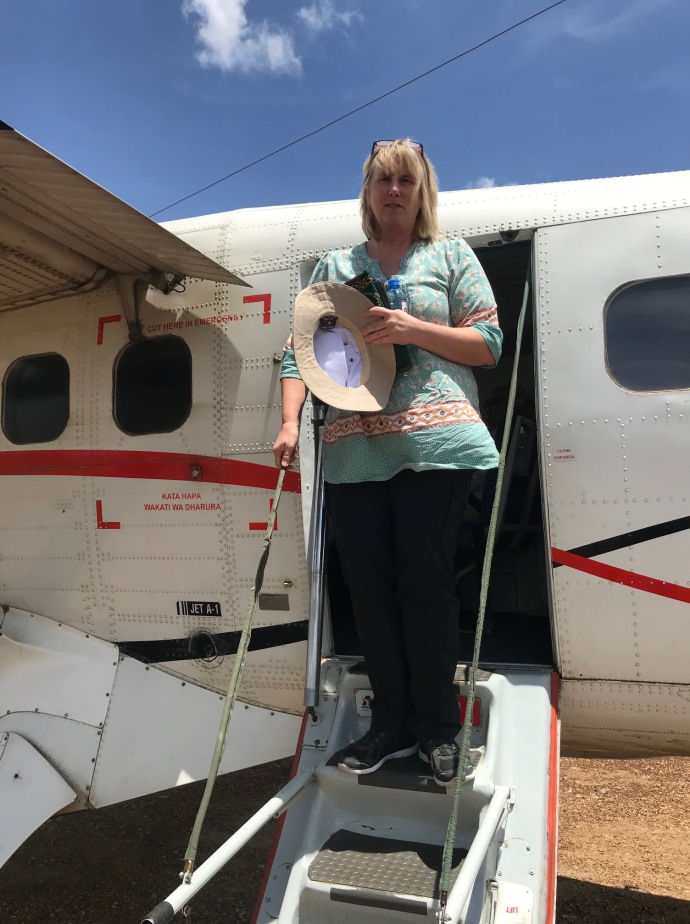 4 takeoffs and landings later we arrive at Mara North Airstrip

Plenty of wild life on drive to camp

Before going to our tent we have a very nice lunch. Fish and vegetables and buns with the option of cheese cake for dessert. While we were eating lunch we were amused by a baboon who jumped across the boulders in the river to come and clean up the bird feed from the bird feeders. Whilst he was eating he kept a constant watch on us before bounding back across the river. 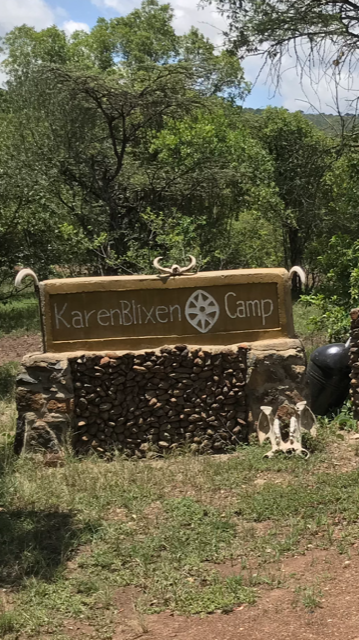 The tents are amazing they are big with a wooden floor, chairs to sit in inside and out on the deck. There is a separate bathroom and a secluded outside shower. The tent is also by the river.

At 4 pm we meet Jonathan to take us on our first safari. We have come at the end of the season and there are only 2 other people staying at the camp so we are lucky enough to be going on the safari by ourselves.

Bikes and bags locked in the security cage at Wildebeest Camp, off on safari

The local people call the Maasai co-existed in harmony with the wildlife. They had their own domestic animal stock and didn’t eat the wild life. However due to increasing population and changing times they have charged their nomadic life and settled at the edge of the Maasai Mara. The Maasai have made a deal with the government – the wildlife are protected and they get revenue from the land the camps are on, plus a portion of the tourist revenue. Poaching is a major offence is Nairobi, punishable by death. Selling wild animal meats or parts is also an offence. Because of this, poaching in this area is extremely rare.

I had imagined we would be going on the safari in a closed truck or at least in cage but we are in an open buggy type vehicle. First off we see more giraffes and zebra including a number of babies. Due to the all year round warm climate, for most of the animals there isn’t a breeding season. 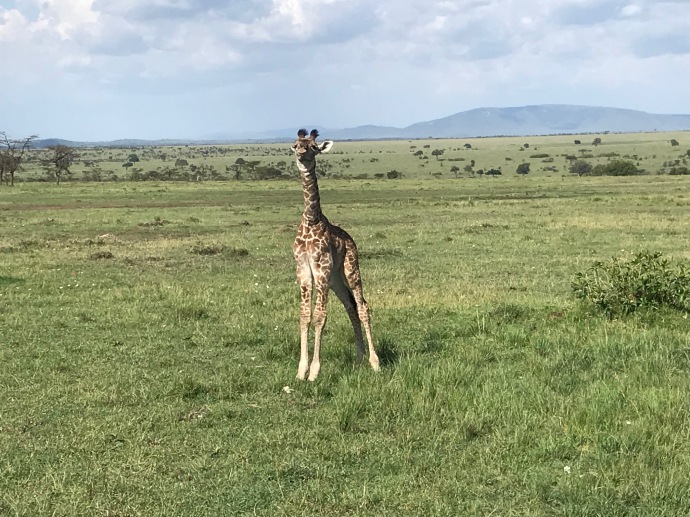 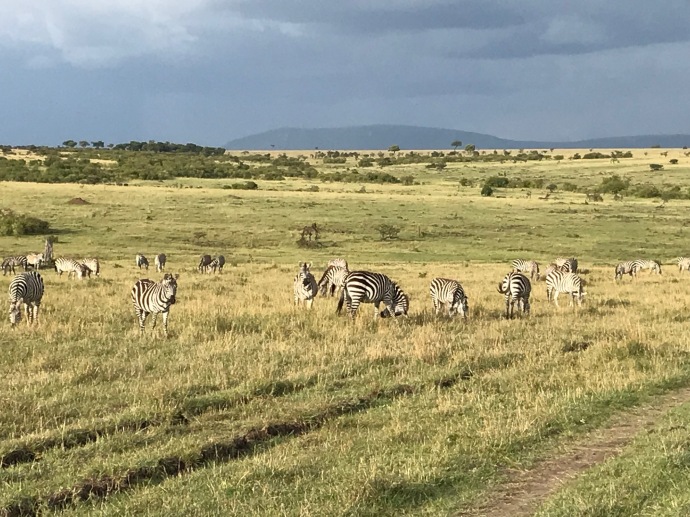 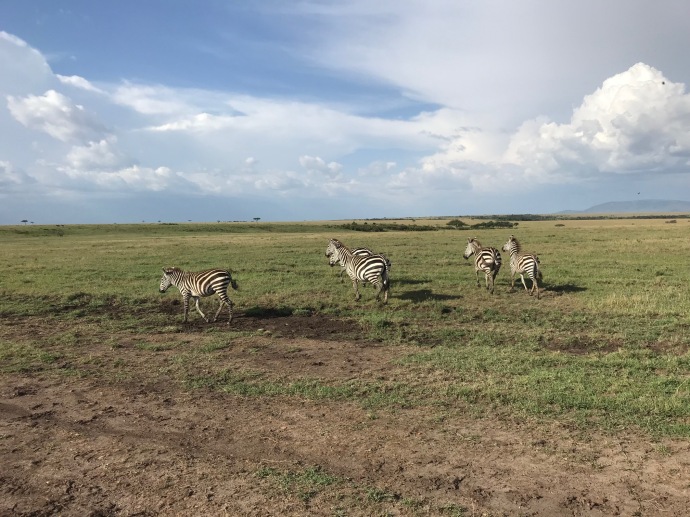 We saw a lone bull elephant eating an acacia tree. The tree branches have very sharp leaves which doesn’t bother the elephant, these are their favorite tree. It is very interesting to see the way they use their trunk, tusks and feet to pull the tree apart. We also saw a huge herd of buffalo with numerous babies. The babies are born with long legs in comparison to their body. The legs are as long as their parents, so when they are in a group the predators can’t spot which are the young to target them.

We saw lots of brightly colored birds and more hippos, plus warthogs and a family of baboons. The highlight was a female cheetah with her three offspring, sun bathing on a small grassy mound. The family didn’t seem worried by have a couple of Safari cars close by. A park warden was there in the background in his car making sure that nobody came too close and disturbed them.

We also saw Thomson Gazelle, Elands, water bucks and wildebeest. There were lots of Topi nicknamed “blue jeans and yellow socks” due to their colouring on their back legs and hooves. 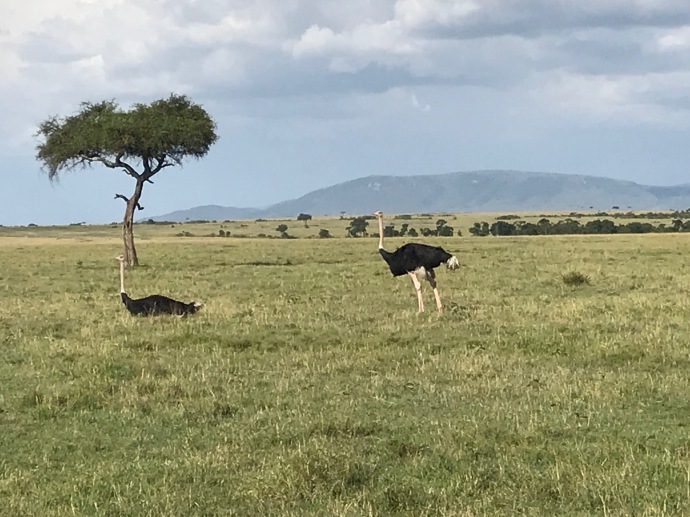 On the way back to camp, all of a sudden the rain that had been threatening arrived and pelted down with thunder and lightning. We were only a few minutes from camp but were soaked by the time we arrived, we had planned to have a shower as the water is hot from 6 am to 930 in the morning and evening, but with thunder and lightning and the rain bucketing down we decided not to have an outside shower.

Dinner was at 730. Before leaving your tent in the dark you have to ring your bell for one of the security staff to come and get you, as the tent is not fenced and wild animals can be found around the camp. Inside the main area there was a nice warm fire where we had a gin and tonic before dinner. We have our own waiter called Reuben plus a room attendant called Daniel.

The staff here are very welcoming and wanting to do everything they can to make your stay pleasant. When you arrive, and each time you come back from safari, you are met with a warm welcome, hot wet towels, plus an umbrella if it is raining.

There is a 3 course meal. Again I have the soup and the chicken and pass on the dessert option again. It’s lovely and peaceful, no TV or loud background music plus only two other guests. Included in the stay is red and white wine and beer, if you want anything else you just add it to your tab.

When we get back to our room the bed is turned down and there is a hot water bottle tucked into each sleeping space. Very warm and cozy tucked in, going off to sleep listening to the hippos.