Traffic was pretty busy for the first 5 km until we were out of Maun.

Next five days of riding

About 11 km out there was an old dog who had been run over and left in the middle of the road, which made me pretty sad. I picked him up and carried him over to the grass by the bushes and carefully lay him down. It made me really sad wondering if he was a stray, and I wondered whether he had ever had a human to look after him. I gave him a couple of pats.

We have seen hardly any roadkill on the roads, but today there was more than I had seen on the rest of the trip. The road is not very busy and I wonder if that is why the animals are caught out.

There are donkeys, cows, and horses free ranging along the sides of the road, and when the cars/ trucks are going past they toot so the animals know they are coming.

The scenery is the same as it has been for the past few days: grass, dirt, scraggy bushes, and bright blue sky.

We have a new rider called Angela who started in Maun. Angela is from Canada and has done the whole trip before, but she has decided to come back and do the 5 days from Maun to Windhot. Angela has the biggest bag I have seen on the trip, it is so big she can hardly carry it, and she can’t close it. One of the staff had to help her.

At lunch I heard her asking one of the TDA staff where she can get giraffe meat, as she has eaten the “big five” (elephant, lion, lepoard, rhinoceros and wildebeest)!. I can’t believe she would boast about that. I suspect we are not going to become good friends.

Another bush camp with no shower or toilet, but at least it is in the middle of nowhere and we are not surrounded by hordes of children.

Dinner is rice and beans and vegetarian noodles (weird mixture, I ate the noodles which were really nice). I was on dishes. 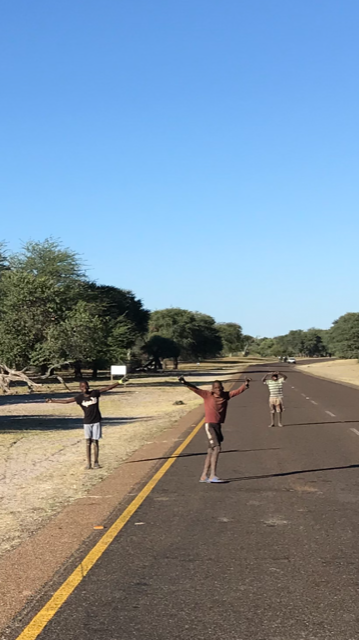