I decided “I can do this, I am going to ride the whole day”. I got dressed really warmly as the start was a 25 kilometre downhill. I have never gone down 25 kilometres in one go. I stopped halfway down to give my rims a rest, as the last thing I needed was a tyre to blow out from overheated rims. At the bottom of the hill I removed a few layers before starting the climbing.

I am taking much better care of nutrition and hydration. I got up the first climb alright with only one stop just before lunch. I got to the lunch spot and felt ok, so decided to carry on. The first 10 kilometres was ok but then not sure if it was the altitude or what, but my legs turned to jelly and I was breathless. I ended up walking up a 7 kilometre hill! It just kept going, up and up and up! Every time I got on my bike I lasted about 100 meters before having to get off each time!

At 60 kilometres I had worked out that at this speed I was nearly 3 hours from camp! Thankfully we then got some downhill, and after that I managed to ride most of the rest of the way. 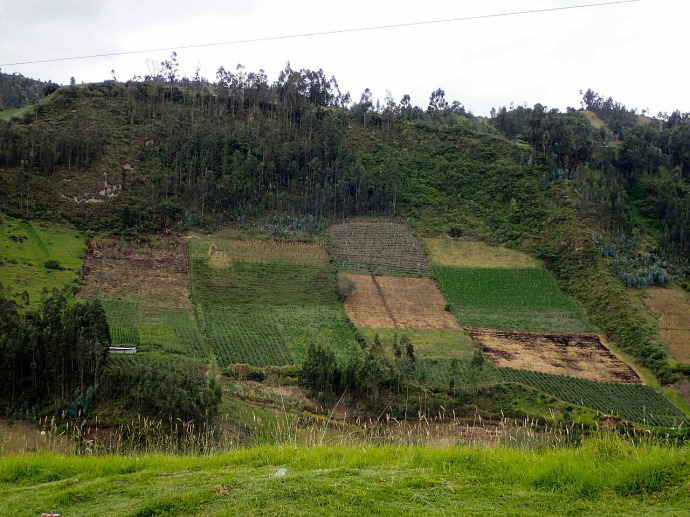 About 4 kilometres before camp I came across the distressing sight of a young motorcyclist who had been knocked off his bike. Unfortunately he won’t be going home again. About 1 kilometre before the camp I then saw a dog nearly get run over. I was quite upset when I got to camp.

The camping site is a restaurant with grass where we can put up tents. They have hot showers! With pressure, and not too hot, bliss! TDA generally gets a couple of rooms when they are available so we can use them as well for the shower queue. I was standing waiting in line, and the housemaid took me into another room they had not yet cleaned and let me use that shower. Heaven! I could take as long as I liked without waiting in line.

As I had got to camp by 1:30, I have washed a couple of things, hopefully they will dry before it gets cold. I have caught up with the blog, had some vegetables and noodles, and a cold beer. Tomorrow we cross the border into Ecuador. It’s four weeks today since the bike ride started. We certainly have gone up and down in altitude and temperature. 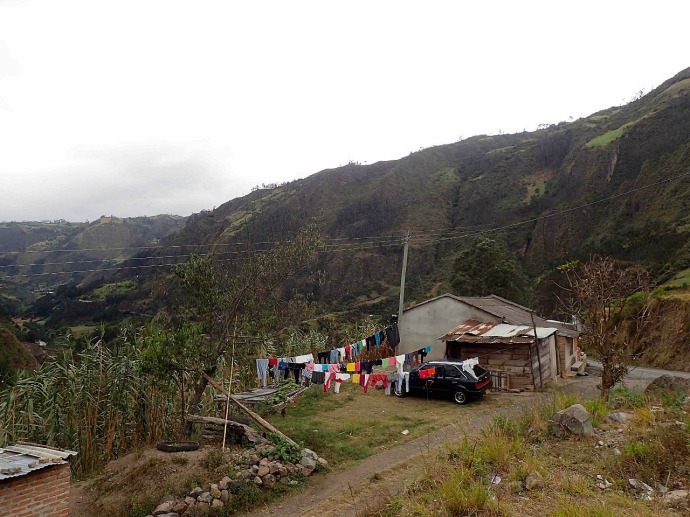 Back to riding today after a rest day. The first 17 kilometres from the hotel was a convoy. We were in rush hour traffic on the motorway, it was insane. I kept imagining what the police at home would do seeing a large group of foreigners riding along the motorway in the rush hour. 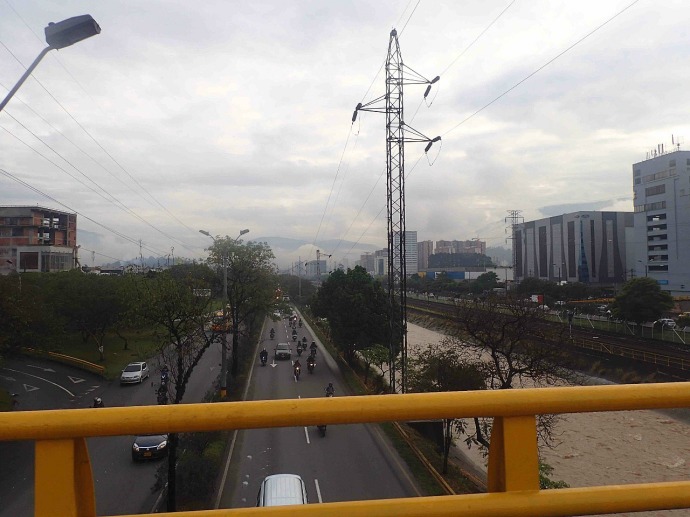 Every now and then a motorbike got in the middle of the convoy and then wanted to turn suddenly which added to the chaos. One of the other riders, having seen me hesitate, told me that when we had to change lanes not to hesitate because the drivers then did not know what you were doing.

The aim of the convoy, apart from leaving the city safely, is to have the slowest riders up the front. This may be the aim but human nature being what it is I am one of the last at the back within a couple of kilometres. I am not that fond of convoys due to the pressure of not keeping other riders waiting. 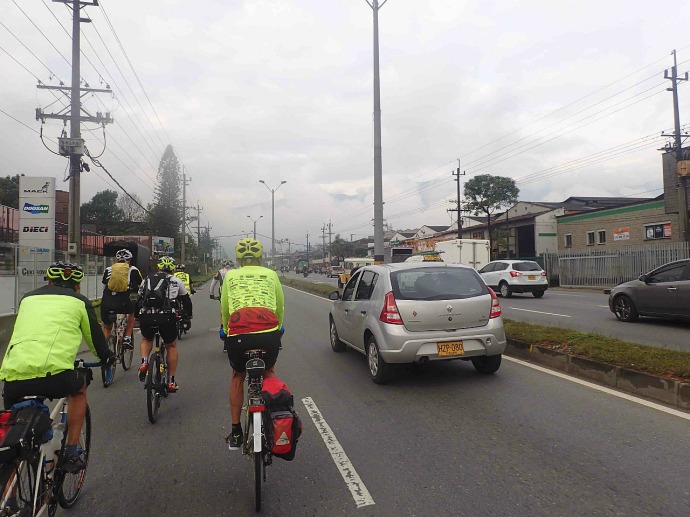 After the convoy there was a 21 kilometre uphill climb. After the rest by days my legs were in pretty good shape and I only had to stop a few times before the top. 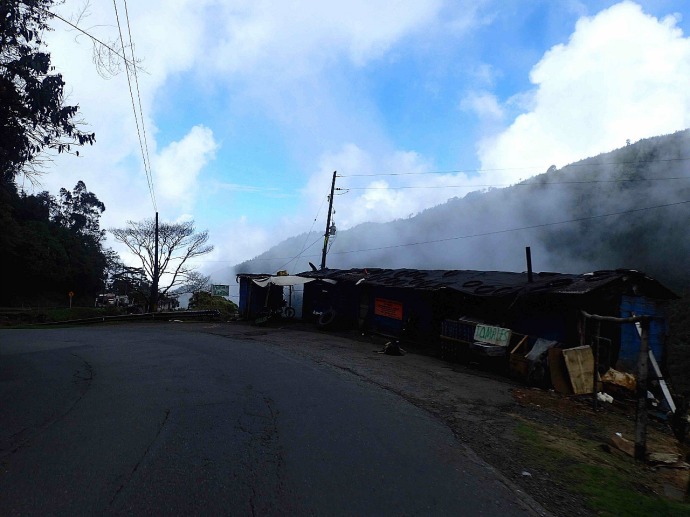 View from Sue’s bike as she cycles up the hill (Photo credit: Sue’s Blog)

I had bought a new battery for my speedometer in Medellin as the mechanic thought that would get it sorted but unfortunately this was not the case. It is disconcerting not knowing how far you have come and also hard to follow the directions.

I saw two of the riders at the summit of the climb and as I am not exactly speedy, I expected they would overtake me within a few kilometres. After I had been riding for about an hour and a half and they still hadn’t, I was pretty sure I had somehow managed to make a wrong turn. I was also pretty sure after another hour that I had missed the lunch truck.

There was a really long downhill with some steep ups. There were a few dogs that rushed out at me which is always a bit nerve wracking, as you never know if they are aggressive or not . I found out later they had had a great day rushing out at a number of the other riders. Shirley, one of the riders, was hit a few days ago whilst riding. 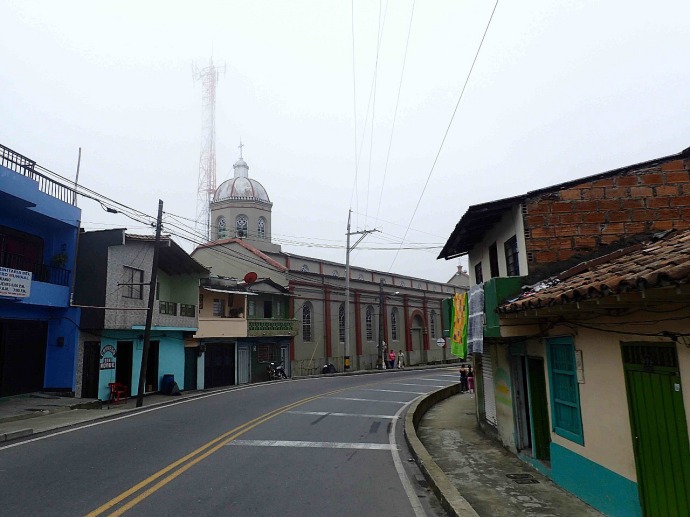 Through a village on the ride (Photo and caption credit: Sue’s Blog)

I was tired and hungry and started pushing my bike up the hills. A motor bike with two local chaps came past and asked me something in Spanish, but I had to say “No Spanio”. They then speed off and arrived back about 10 minutes later with a mango and oranges for me to eat. I must have looked as tired and dispirited as I felt.  I said mucho gracious a few times and they speed off smiling and waving.

In much better spirits I pedalled off again. Five kilometres later – yay there was the lunch truck! Yay I wasn’t lost! Yay also to the news that it was only three more kilometres to camp! And double yay it was all downhill! 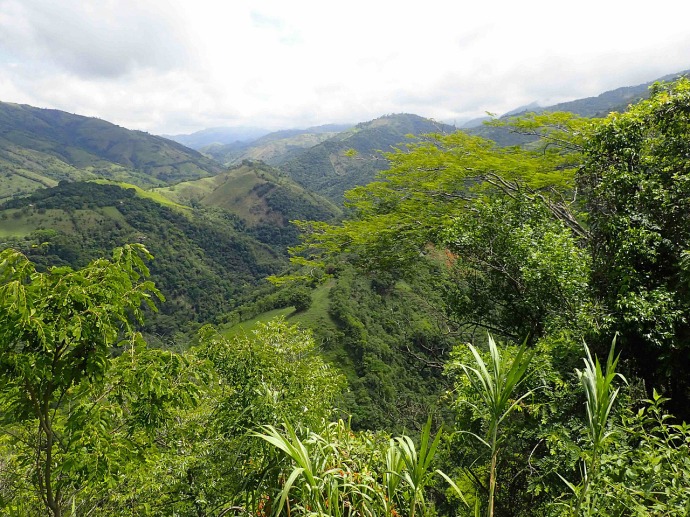 Once I got to camp, I put up my tent and I headed over to the bike clinic. The mechanic played around with my speedometer for a while but decided it was beyond fixing. One of the other riders offered to sell me their spare cats eye (a type of speedometer) for US$150, but the attachment that kept it on the bike had been cut so it would not fit around my handlebars and needed two cable ties to hold it in place. I decided that I did not want to pay the price that it cost new for something that did not fit my bike. So I will probably have no speedometer until Bogota, in another five days. 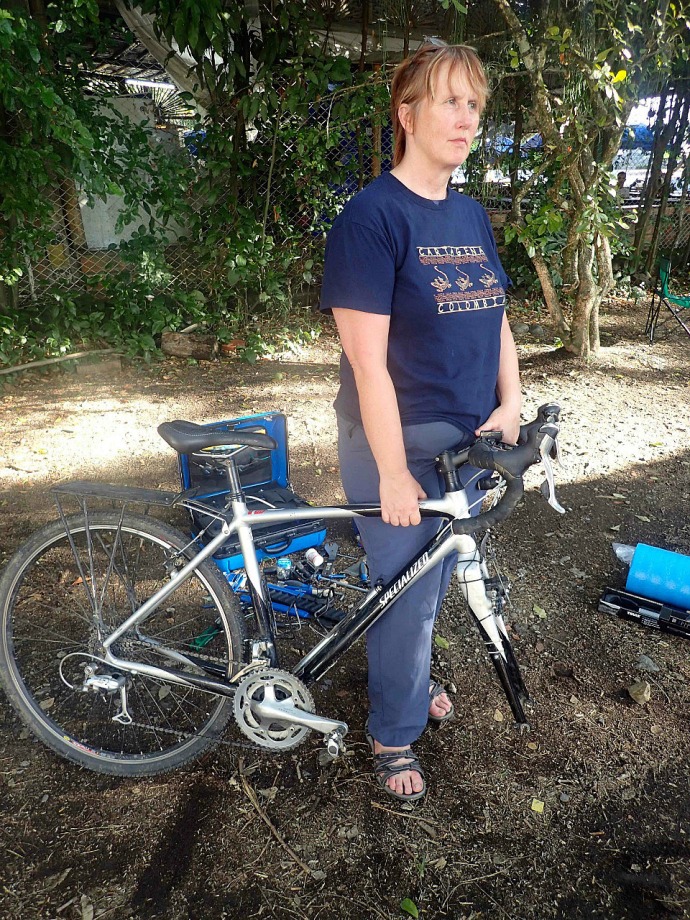 Waiting for my bike to be worked on (Photo credit: Sue’s Blog)

At this stage I realized I had lost my wallet, so I spent the next hour retracing my steps to no avail. Luckily it only had cash, not any credit cards.

I went to bed at the usual time of about 7:15pm and as I was going to sleep I heard the rain starting again. As we had come back down in altitude it was again sticky and hot. 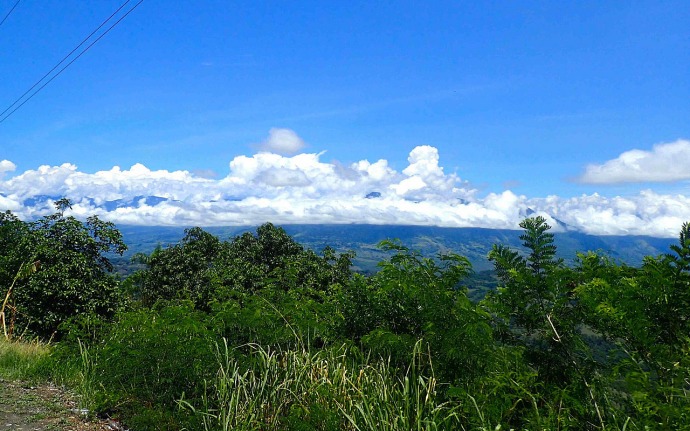 So once again we set off early to try and beat the heat. The mosquitos were pretty savage again in the morning and it’s hard to see them when it is still dark.

We have been noticing since we have been in Italy not only do the Italian women dress so beautifully – very chic! – but so do the riders. When they are in couples you can understand the matching clothes, but you see groups of riders that not only match clothes, but also their helmets, gloves, and shoes. It’s like the last thing they discuss before they finish a ride is what clothes they will wear the next day. And boy, are their whites white – they glisten! I am thankful for wearing sunglasses as they come towards me. We, on the other hand, look like a bedraggled bunch who have been sleeping rough for a couple of months and mostly hand washing our clothes (regardless of what we do, the whites in our clothes are gray!)

The first half of the ride to lunch today was flatish and not too hot. We were at lunch by 10:30am again. The second part of ride was hot and then climbing. We stopped 5k before the camp to go to the shops but they were shut. We thought it was just for the usual siesta, but no, turns out they are shut every Thursday afternoon for the whole afternoon.

So off to camp, we got there and yay there was a swimming river right by camp, so I quickly put up the tent and then headed off for a swim. Later I was talking to Dayna and she told me she saw a SNAKE!!!! In the river!!! Not sure how much more river swimming I will be doing!!

At the rider’s meeting that night Christiano told us that we are doing a 56k climb first thing the next day. I am not sure if some people have been complaining or if he had an idea of the night that was coming, but he gave us a long talk on how this ride was not only a test of physical strength but was also a test of psychological strength as well.

Not sure what it is with the toilets over here, I have got used to no soap, and even the squat toilets, but once again we are in a camp with no toilet paper!!!! Plus not sure how common flossing your teeth is here, as I had a line of small girls watching me in the wash room, and they ran away giggling when I turned around.

There are not so many bugs tonight but have a couple of things to add to the perfect campsite
1. Mosquito free dome
2. Snake free river!!!

So back to the psychological testing. We had a number of families camping near us at night. One family partied on until midnight, with loud Italian voices, laughter, and children laughing, playing, and giggling. We of course were all in our tents from about 8pm after a long day and a big day the next. While I was lying there unable to sleep due to the noise I thought “I can either get really frustrated or I can enjoy that once in my life I am at an Italian party” (even though I was uninvited, and in a tent a metre away). The Italians have loud, but quite singsongy voices.

Also I’m not sure if I have already mentioned it but last night we had members of the sports club partying it up, yelling and shouting in the pool area (by our tents) until about 3am.

Once the Italian family finally went bed – just after midnight – we had people partying in river until about 4am. I kept thinking thankfully it is a rest day the day after tomorrow. And I hope they fall over in the river and hit their heads. Although if they had, they would probably have just woken up and thought “Hey dude, must have been a good night, because damn I have a hell of a hangover!”.