It was very nice to have a sit down breakfast in the restaurant. I went in the lunch truck to lunch as planned, helped to set up lunch and then set off. I did not have lunch as it was only 9am.

The lunch truck had parked part of the way up a long climb. The first 8 kilometres was an uphill climb, and I was pretty pleased with the way I got up it. Then it was rolling hills, a couple of big downhills, then back to rolling hills all the way to camp.

Up along the top of the ridge it was pretty windy, and I nearly got blown out onto the road a couple of times. I got off my bike at one stage as it was so windy.  The view was fantastic, just mountains stretching away from both sides of the road as far as I could see. As we have seven days riding and I don’t know if I will be able to charge my phone at all, I did not take any photos of the view but hopefully Sue took her usual number of photos. It was great riding with the glorious views and the gradient not too steep.

Looking back from where we’ve come (Photo and caption credit: Sue’s blog) 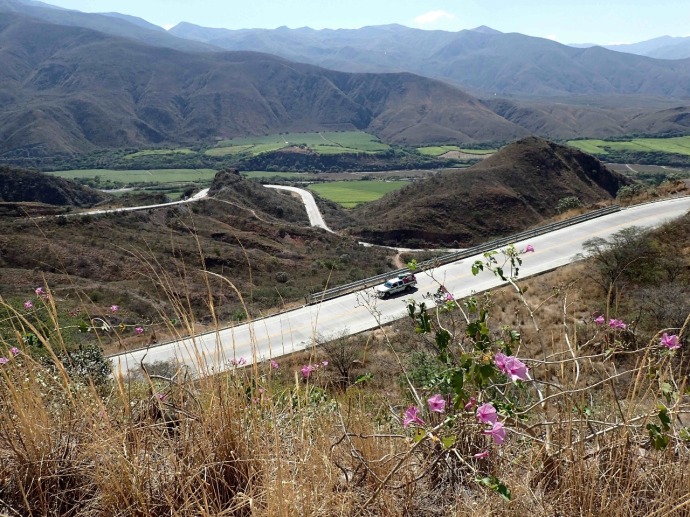 Up up up and up (Photo and caption credit: Sue’s blog)

I got to camp about midday. Just before the camp I had a standoff with a dog. I had my bike between us and every time I took a step backwards he would rush at me snarling! Luckily a local lady saw what was happening and threw stones at him and he ran away.

We are staying at San Jorge x Aquatic Centre. It was built as an aquatic centre and had three empty pools. Sadly it was not well used by the local population and now is shut. The caretakers did fill up the small pool for us. 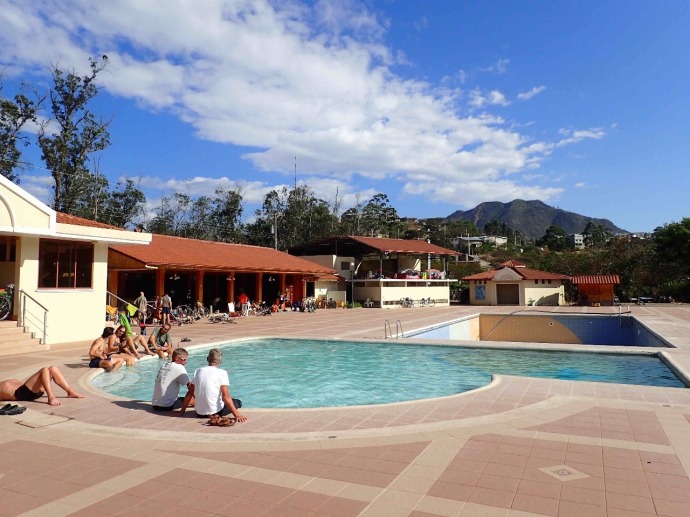 I got a nice spot to camp up on a mezzanine floor with a good breeze. Given it was only mid day I went to get a coke instead of a beer. The coke was warm, the beer was icy cold! So no need to guess what my choice was.

On the way to the camp there was not really anywhere to get food apart from just before the camp, and I decided to wait until camp to get something.  Usually at camp there is a restaurant, or a local who has set up shop and cooks. Today there was nothing, and I could not be bothered riding uphill into town, but was now hungry as I had missed lunch.  I made do with peanuts and a couple of Oreo biscuits.

I did some washing as there was plenty of time to dry clothes, chatted to some other riders, and caught up on a couple of days with the blog.

At the rider’s meeting just before dinner we got an update on Phil. Most likely Phil will get airlifted to Quito tomorrow and his son from New Zealand will also come there. The hospital in Quito is bigger and better equipped. Phil is talking, but still very confused, but certainly he will recover. It’s early days yet to know how much, if anything, the head injury will affect him. We are all going to either wear orange clothing or put orange flagging tape on our helmets to keep Phil with us as we continue on our journey sadly without him.

On the road today (Photo and caption credit: Sue’s blog)